No doubt Don Lemon will miss him, but Bob Beckel‘s brief jaunt at CNN is over.

The pale, ginger-haired, liberal correspondent who often sports suspenders to hold up his adorably tubby frame is now back at Fox News’ The Five, as reported by Mediaite, who had a glaring, or I should say, a “whop” of an error in the story’s lede. But who cares! They seem to have gotten the news first so good for them. Whop. Whop. Whop.

But a lot has changed at FNC since then. So perhaps all is forgiven?

At the time, FNC’s then EVP of Programming Bill Shine, who is now a co-president at the network, said in a statement: “We tried to work with Bob for months, but we couldn’t hold The Five hostage to one man’s personal issues. He took tremendous advantage of our generosity, empathy and goodwill and we simply came to the end of the road with him.”

Beckel revealed his feelings about being shown the door on Twitter, saying, “I just can’t understand the anger in Fox statement. I was healing from major back surgery i could not walk, I took no advantage I got well.” He called the whole thing “very very sad” and said his future was in “God’s hands.” In other words, CNN Prez Jeff Zucker. 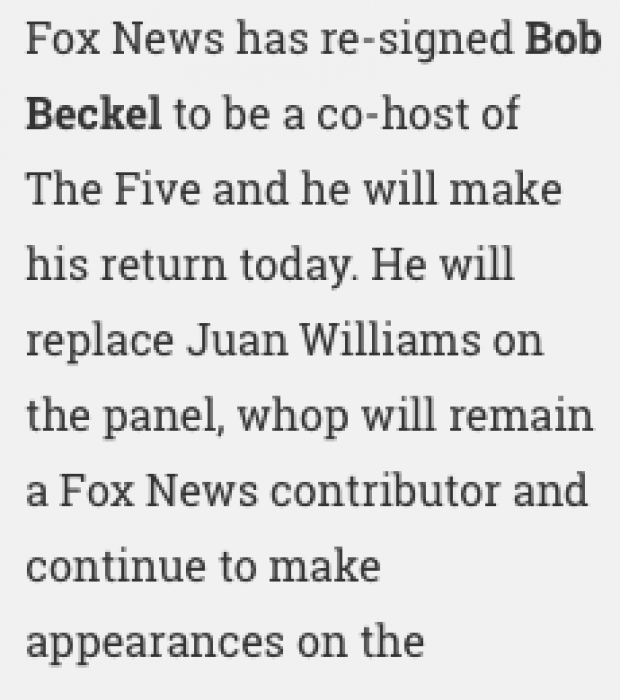 Mediaite has since corrected its whopping error.

And Shine has obviously blatantly reversed his “end of the road” remark.