What kind of self-respecting on-air male journalist whines about getting tweets from a random crazy person on Twitter?

First off, we all know there are mentally unstable people who spend their lives on Twitter. They existed before online journalism and either phoned in their insanity or wrote a letter to the editor of the newspaper. Second, we all have delete and block buttons and ways to report this crap to Twitter and the police.

So over the weekend here is what happened to poor Stelter, who probably isn’t starving tonight, searching for shelter or facing the fact that six of his children died in a fire, which is what happened to a longtime aide of Rep. Elijah Cummings (D-Md.) last Thursday when her Baltimore home went up in flames.

Stelter received a nastygram from a stranger calling him a “fake news bald fat fuck.” By the way, at least five of those words are technically true. (Sorry, just joking. It’s just three.) The individual then told him to “kill yourself.” Yes, too far. And sure, mean, awful, horrible. What kind of a hole did this person grow up in? We could spend all day thinking about how tragic that is and how terrible Stelter must feel having to read that 20 times over.

A better idea? Stop crying about the dumbest things written on Twitter. And ABOVE ALL, how about we not encourage the CNN newsman by offering him serious pity. 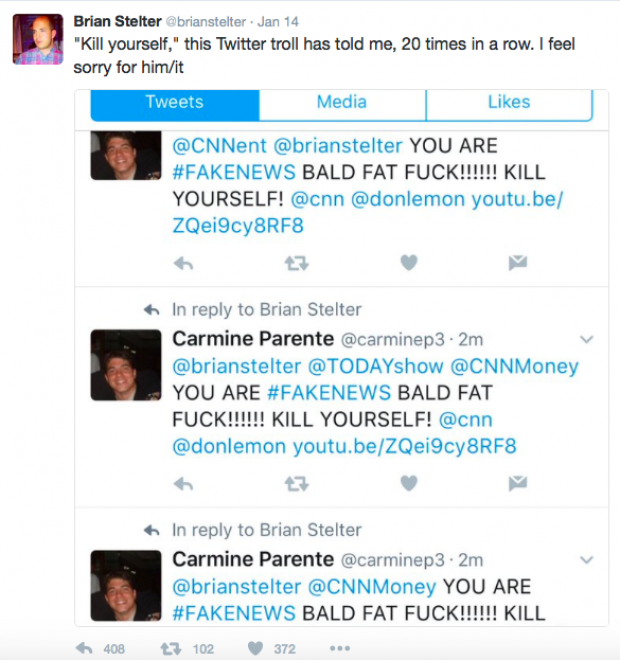 Some responders actually reminded Stelter how great he is, just in case his self-esteem suffered from those 20 suicide suggestions.

Robert Nicholls wrote, “Just remember that you have more people that like and respect you than don’t. I hope the you have a nice weekend!” Stelter replied, “Thanks” with a smiley face.

Politico Playbook writer Jake Sherman and Politico congressional reporter Burgess Everett appeared to have a sense of humor about it. Sherman wrote, “He’s looped me in now.” Everett asked, “Can I get in on this?”

@blahblahblah1876 wrote, “I look forward to your newsletters. These folks don’t know better or are Russian paid for. He has some rage issues apparently.” Stelter replied, “Thanks.”

News Director Rob Selkow stated the obvious and gave Stelter a virtual hug: “Your ‘kill yourself,’ troll has a serious thinking disorder. Sad. Your show is the only one I DVR. Keep up the good work.”

Nick Hennen felt compelled to soothe Stelter by saying this: “Ugh. I feel compelled to tell you I’m sorry I’m behalf of the Internet, but I know you get it. Still, this is awful to see.”

Mel Willie III, who self-describes as not a Hillary Clinton supporter, appeared to be among the few to respond with some sense.

He wrote, “Stelter does this all the time. When he feels over-persecuted he cherry picks the harshest troll n posts for sympathy points.”

Readers who have been fretting for Stelter’s feelings can rest assured that @Carminep3 has officially been shut down.