Al Gore opened up about meeting with President-elect Donald Trump and shared that the two of them continue to talk through more “discreet channels.”

In an interview published Wednesday in the Hollywood Reporter, the 68-year-old former vice president talked about the sequel to his upcoming climate film “An Inconvenient Truth” and his “receptive” meeting with Trump after the election.  (RELATED: Ivanka Trump Meets With Al Gore To Discuss Climate Issues) 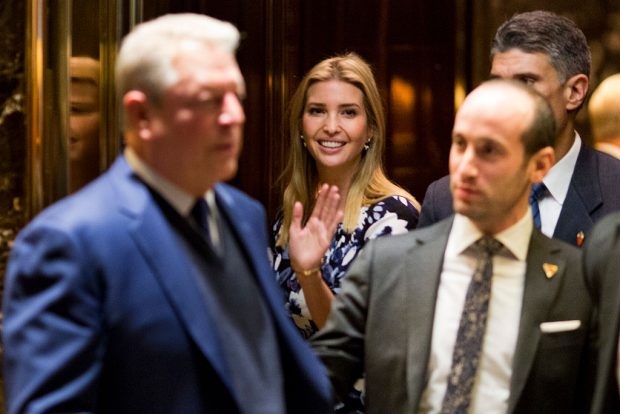 “He was receptive to some of what I had to say, and I appreciated that,” Gore said of their meeting on December 5. “Candidate Trump made a number of statements and wrote a bunch of tweets that caused concern, but he also has other statements that at least give rise to the possibility that he and his team will take a fresh look at the reality of what we’re facing here.”

When the former vice president was pressed further about what they the two have talked about, he would only joke that he didn’t want to share too much as he doesn’t want the “Russians” to hack them.

“I won’t get into the details of how we have communicated,” Gore said. “I don’t want the Russians to hack it. I’m going to keep the confidence of the president-elect for now.

“He [Trump] himself has given some clues that maybe he will have a mind that’s more open,” Gore added, according to another post by the magazine. “He’s full of surprises, so we’ll all be watching.”

“I and others are ready to do battle if that’s necessary,” he continued. “And I have a feeling that to some degree, it will be.”

He also criticized Obama for failing to do more on cap-and-trade during his first term and praised Russian President Vladimir Putin when it comes to changing his “views on climate” issues.

“I first met him [Putin] when he was deputy mayor of St. Petersburg back in the early ’90s,” Gore responded. “He’s come some distance in his views on climate, [and] Russia did not play a blocking role in Paris at all. Putin gave what I regarded as an excellent speech in Paris, and I was glad to hear it.”