Remember Corporal Klinger on M*A*S*H? He was the fellow who wore women’s clothes so the Army would declare him a Section 8 and send him home. In later seasons of the show, he gave it up and stopped being hilarious. But now, Bradley Manning has pulled off that ploy in real life. Obama is the first president in U.S. history to commute the sentence of a “woman” for the crimes of a man.

I called it, a week ago today:

I kinda hope Obama frees this traitor. Do it. What a perfect capper to the identity-politics nightmare of the past decade. “You betrayed your country? Well, I guess we can let it slide. It’s just not fair to lock you up, now that you’ve put on a wig and given yourself a girl’s name.”

CNN reporter Jeff Zeleny argued on Tuesday that President Obama commuted Chelsea Manning’s prison sentence because the former Army private is transitioning from a man to a woman.

“I think the question this president and the White House will have to answer here, will answer, and I think it’s an important one, how much was the personal story of Chelsea Manning involved in this,” Zeleny said in a panel discussion of the White House decision.

What a great precedent to set. You can betray your own country and declare yourself a girl, and POTUS will let you off the hook on his way out. And your book deal will be crazy.

Pay attention to all the people who try to shame you whenever you refuse to deny science. They insist Manning is a woman, and then they turn right around and tell you Rachel Dolezal can’t be black even though she insists that’s her identity. Then, and only then, does biology matter to these people.

Well, I’m not falling for it. This traitor can pretend to be whatever he wants, but I’m under absolutely no obligation to play along. Too bad, rubes.

The dude is a dude.

Are you triggered yet? 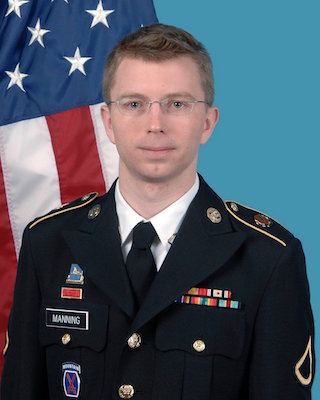