Rep. Jason Chaffetz (R-Utah) got called out for being a “dick” and a “slimy rat fuck” after he ran a picture of himself shaking Hillary Clinton’s hand at Donald Trump’s Inauguration.

Accompanying the photo, Chaffetz wrote on Instagram, “So pleased she is not the President. I thanked her for her service and wished her luck. The investigation continues.” 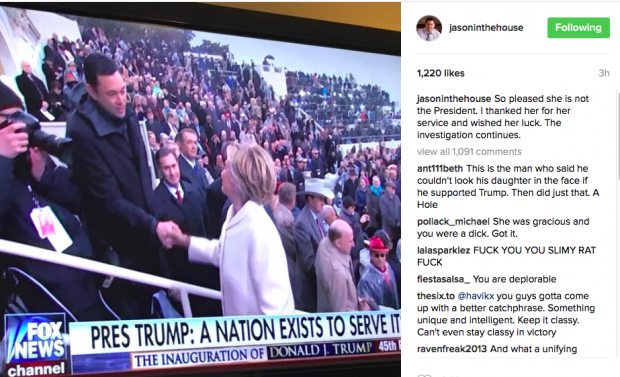 Commenters quickly called him out for the weirdness of him being so obviously fake.

“She was gracious and you were a dick. Got it.”

“FUCK YOU YOU SLIMY RAT FUCK”

“You really are the worst kind of man.”

“Give it a rest.. she’s gracious, and you’re the epitome of a dick face.”

“You are a vile cabbage patch kid looking bitch. How disgustingly petty. Even Trump had the dignity to treat her with more respect than you. You are truly pathetic.”

The post nonetheless received 1,220 “likes” if that means anything.

But the commenters largely insulted the congressman to his core.