And the envelope please … SIG Sauer wins the big Army contract, the most important military handgun contract of our generation. The XM17 will likely lose the “X” and be made by American workers in an American factory for American soldiers.

While I have written extensively about the laborious Army Modular Handgun System (MHS) process for adoption of the next service pistol to ride in soldiers’ holsters, today, January 19, 2017, (write that down) the news came in. And in a surprise development during the firearm industry’s biggest event—the SHOT Show—the U.S. Army announced that SIG Sauer will be the next supplier of pistols for the United States military.

This gun, a variant of the P320, will replace the venerable M9 as made by Beretta and adopted in 1985. While a number of companies submitted guns, rumor has it that it came down to Glock and SIG. The process has not been terribly transparent, and the RFP is nothing short of terribly confusing.

“I am tremendously proud of the Modular Handgun System team,” said Army Acquisition Executive, Steffanie Easter. “By maximizing full and open competition across our industry partners, we have optimized private sector advancements in handguns, ammunition and magazines and the end result will ensure a decidedly superior weapon system for our Warfighters. As MHS moves forward into operational testing, the due diligence taken by all of the stakeholders will ensure a program that remains on-budget and on-schedule.”

The contract is worth north of $580 million and goes through 2027. What does that mean short term? The first wave is reportedly to be more than $100 million.

We are waiting from official comment from SIG, but at the SIG Sauer booth today, they would have popped the cork on champagne if they had it handy.

But, as with all such big government contracts, it isn’t over until it is over. Already other entrants are not happy with the end result and are making noises about the process. This story is developing, and we will likely have more information soon. There may well be appeals and challenges. But it looks pretty over.

That said, the P320 is a very good gun, one we have tested and awarded an American Rifleman Golden Bullseye Award for Handgun of the Year. 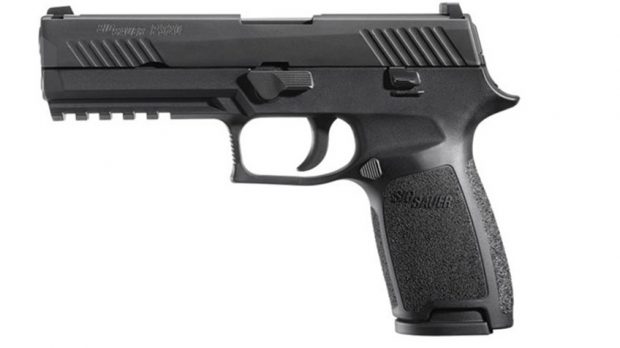