Canadian journalist Doug Saunders could not contain his disgust of President Donald Trump Friday when he compared the New York businessman becoming the leader of the free world with the 9/11 terrorist attacks that murdered 3,000 Americans.

“If you thought you’d never see anything on TV as frightening as 9/11, this was it. But the consequences of this are far more damaging,” Saunders tweeted.

If you thought you’d never see anything on TV as frightening as 9/11, this was it. But the consequences of this are far more damaging

The breathless declaration was greeted with agreement by a fellow Canadian journalist, Scott Deveau, who writes for Bloomberg Canada. 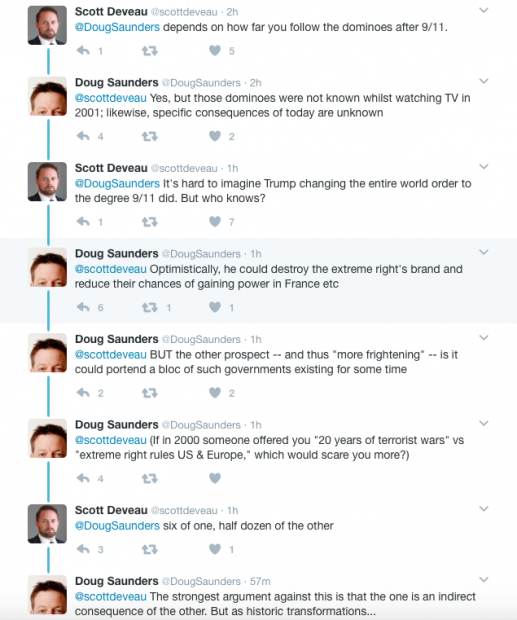 As expected, there was also a lot of pushback.

@DougSaunders so um like 3000 bodies are strewn across the landscape. I missed that. What channel is that on?

@DougSaunders You’re comparing innocent lives lost bc of terrorist to the peaceful swearing in of a democratically elected president?

@Bioben78 @DougSaunders He works in Canadian media, so he’s more than a *little* out of touch with reality @ezralevant @SheilaGunnReid

@DougSaunders @GlobeandMail I am all for Freedom of Speech, but idiotic comments like this reflect poorly on your Organization.

@DougSaunders Yep. 3,000 people murdered in a single day is nothing compared to a speech.

Seizing control of a powerful state is, by definition, more potentially damaging than a criminal act on any scale. And harder to reverse

To have heard those words without fearing for the security and stability of the world is to have ignored history. They place us all at risk