The usual “rule” is that reporters steer clear of presidential children.

But when a reporter from Toronto’s National Post broke that unspoken journalistic law on Friday, a Donald Trump Jr. parody account of Trump’s eldest son, who has five children of his own, publicly scolded her when she ridiculed Barron Trump, President Trump and first lady Melania Trump’s 10-year-old son. Barron previously wore a bored expression on election night when his father won the presidency.

This time around, he laughed and played peek-a-boo with Ivanka Trump‘s newborn son, which was reported by a number of news outlets.

Barron was also animated on the parade route on Pennsylvania Avenue, waving to voters along with his parents. 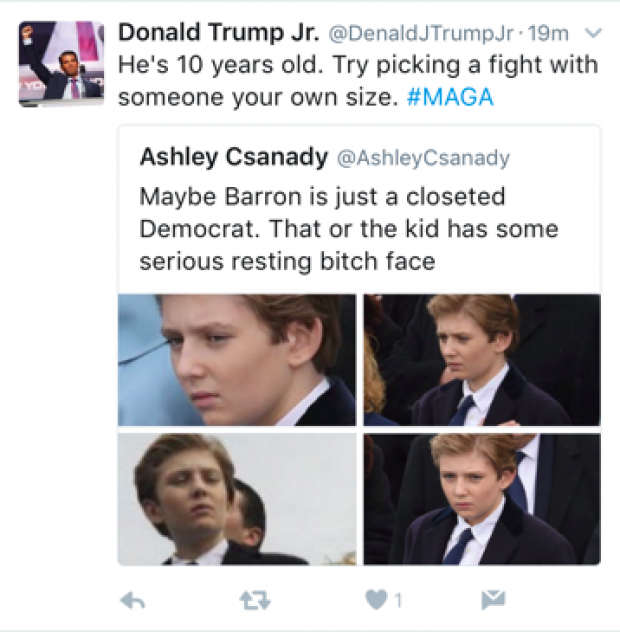 As these things go, Csanady took a lot of heat on Twitter with strangers declaring that she had bullied a child and that she was “fat” and looked like a “tranny.”

In other words, they don’t want her to be a so-called bully, so they turn into complete assholes and bullied her instead. Meanwhile, no one can really blame Barron’s fake older brother from coming to his defense.

The reporter explained to Lorrie Goldstein, a columnist for the Toronto Sun, that “it was a joke about his weird photos.”

CORRECTION AND EXPLANATION: The Mirror was duped by a Don Jr. parody account. The above copy was changed to reflect the truth.