Linda Sarsour, one of the organizers behind Saturday’s Women’s March, being held in Washington, D.C., was recently spotted at a large Muslim convention in Chicago posing for pictures with an accused financier for Hamas, the terrorist group.

Sarsour, the head of the Arab American Association of New York and an Obama White House “Champion of Change,” was speaking at last month’s 15th annual convention of the Muslim American Society and Islamic Circle of North America.

While there, she posed for a picture with Salah Sarsour, a member of the Islamic Society of Milwaukee and former Hamas operative who was jailed in Israel in the 1990s because of his alleged work for the terrorist group. 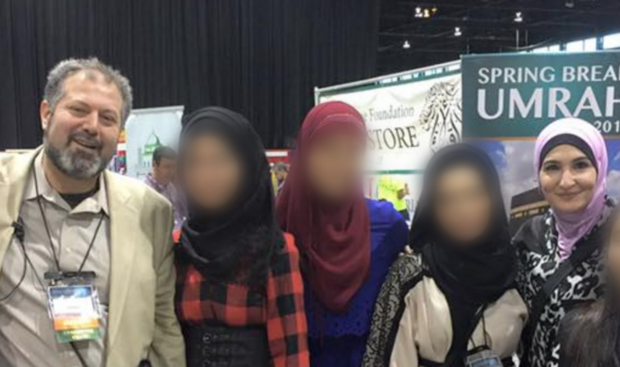 Salah Sarsour, who is also a board member of American Muslims for Palestine, served as a bodyguard of sorts at the convention for Sumeyye Erdogan Bayraktar, the daughter of Turkey’s president, Recep Tayyip Erdogan. (RELATED: Ex-Hamas Financier Spotted At Muslim Convention In Chicago With Turkish President’s Daughter)

While it is unclear if Salah and Linda are related (though they share the same surname, she has suggested in the past on social media that they are not and did not respond to requests for comment), she has other family ties to alleged Hamas operatives. Though she avoids discussing it now, Sarsour has acknowledged in past interviews that she has cousins serving prison time in Israel because of their work for Hamas.

Sarsour has denied having any contact with the terror group. She told The New York Times in 2012 that she would not have been appointed an Obama “Champion of Change” if she had.

The activist has risen to national attention recently. She served as a delegate to the Democratic National Convention, and she is one of four lead organizers for the Women’s March.

The event is expected to attract 500,000 people and will feature several high-profile progressive speakers. But it has been heavily criticized for excluding pro-life women’s groups. Meanwhile, the Council on American-Islamic Relations, a Muslim civil rights group which opposes abortions past 20 weeks, was asked to take part in the event.

Linda Sarsour has close ties to that organization, which was named an unindicted co-conspirator in the Holy Land Foundation (HLF) terrorism case.

HLF was found to have funneled money to Hamas, which was designated a terrorist group in the 1990s.

Salah Sarsour has ties to that group.

Sarsour was implicated in Hamas activity in the West Bank in the 1990s, according to the Anti-Defamation League (ADL).

The FBI memo stated that the Sarsours passed money in $1,000 and $2,000 increments to a Hamas operative named Adel Awadallah through their Milwaukee furniture store.

Awadallah was a commander in the Qassam Brigades, Hamas’ militant wing.

Sarsour has not been charged with any crimes in the U.S. His brother Jamil was arrested and charged in 2003 with money laundering after returning back to the U.S. from Israel. He served a four year jail sentence for his work for Hamas.