Richard Cordray, head of the Consumer Financial Protection Bureau (CFPB), used a private device for government communications, and didn’t create appropriate records of those messages with the bureau, according to documents obtained exclusively by The Daily Caller.

A longtime Democrat from Ohio, Cordray has served as head of the CFPB since January 2012, a position he is scheduled to hold through July 2018.

A source told TheDC that he submitted a Freedom of Information Act (FOIA) request in August 2016 for more than a year’s worth of text messages on official devices to and from various CFPB staffers.

The bureau responded that there were no records on any “CFPB issued or CFPB reimbursed devices” for any text messages sent or received associated with Cordray. 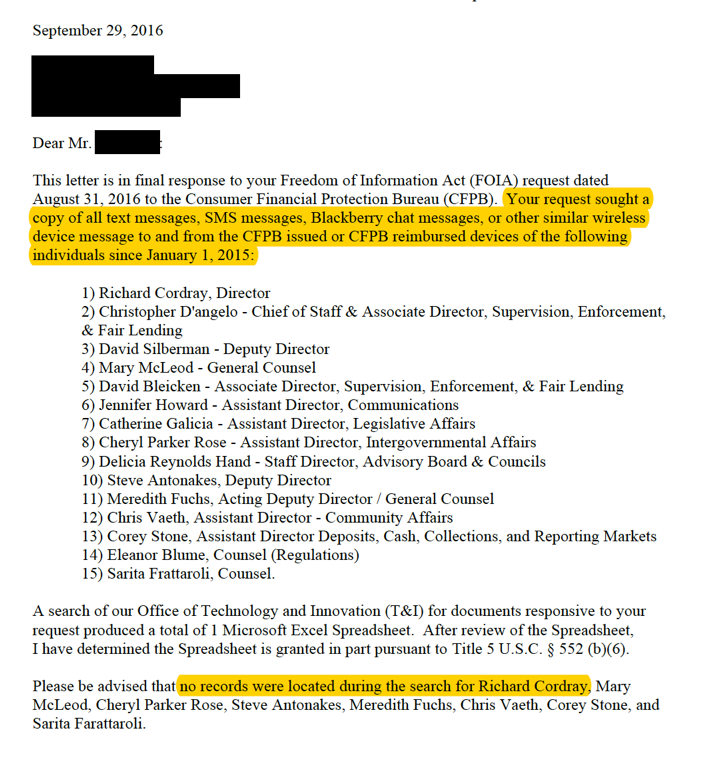 Response to a FOIA request  indicating there are no official records for electronic messages for both Cordray and other staffers.

Along with this letter, the source received a month’s worth of text messages of some CFPB staffers. He pursued it further, asking for more messages from the official devices of CFPB staff.

CFPB then released to our source a much larger collection of messages, put together in a spreadsheet. Again, no official messages to or from Cordray were included.

However, some of those messages, such as this with David Bleicken, ends with the signature “RC,” in row 168 pictured below.

Later, the CFPB acknowledged to our source that in row 168, “RC” is indeed Richard Cordray, confirming that he had used a private device for official business. 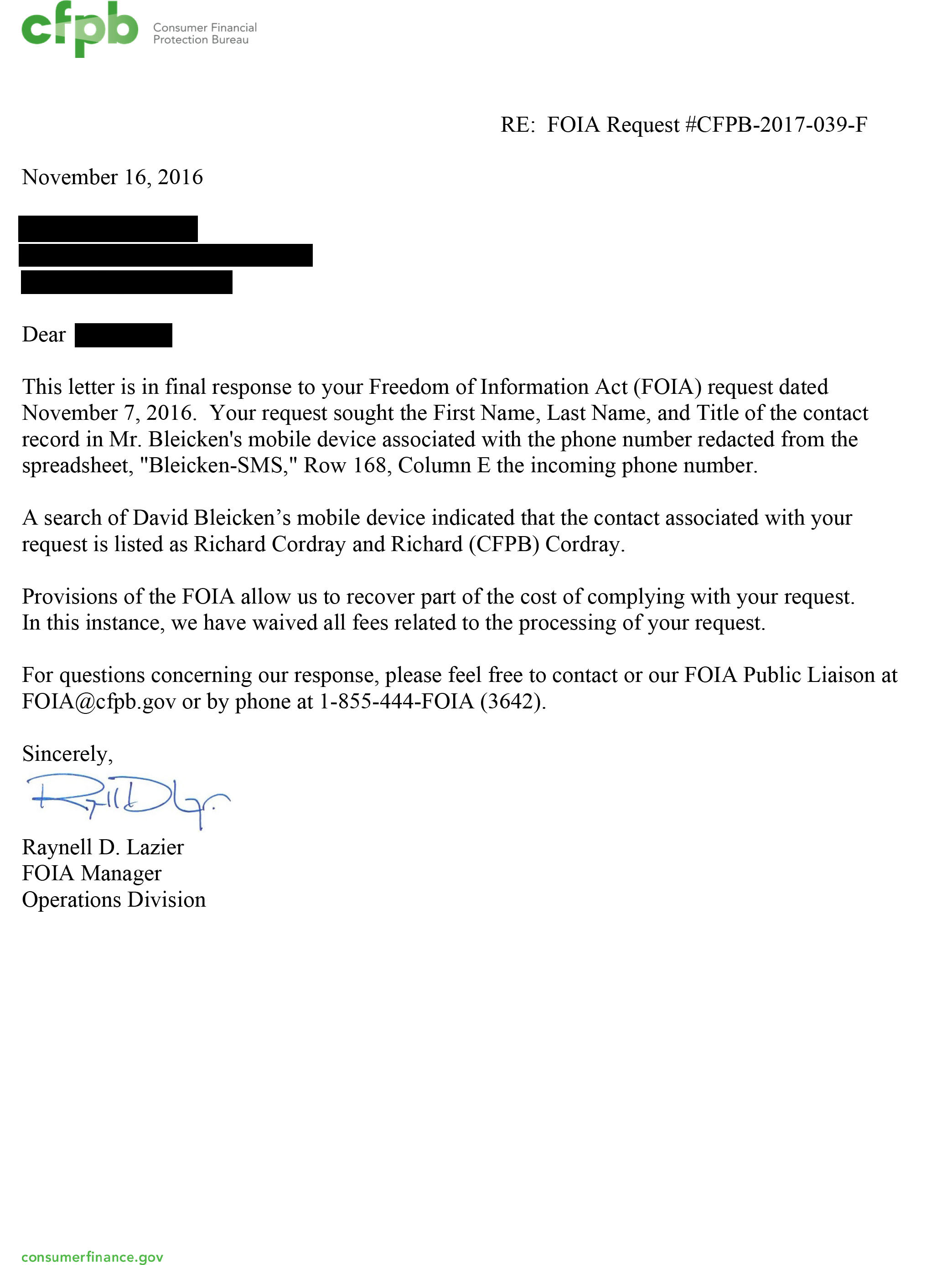 Letter from CFPB confirming that Richard Cordray is the contact associated with messages being signed “RC,” meaning Cordray is using a private device.

The source then obtained a record of all messages and voicemails from Cordray’s private device to and from other CFPB staffers via another FOIA request, and exclusively provided them to TheDC. 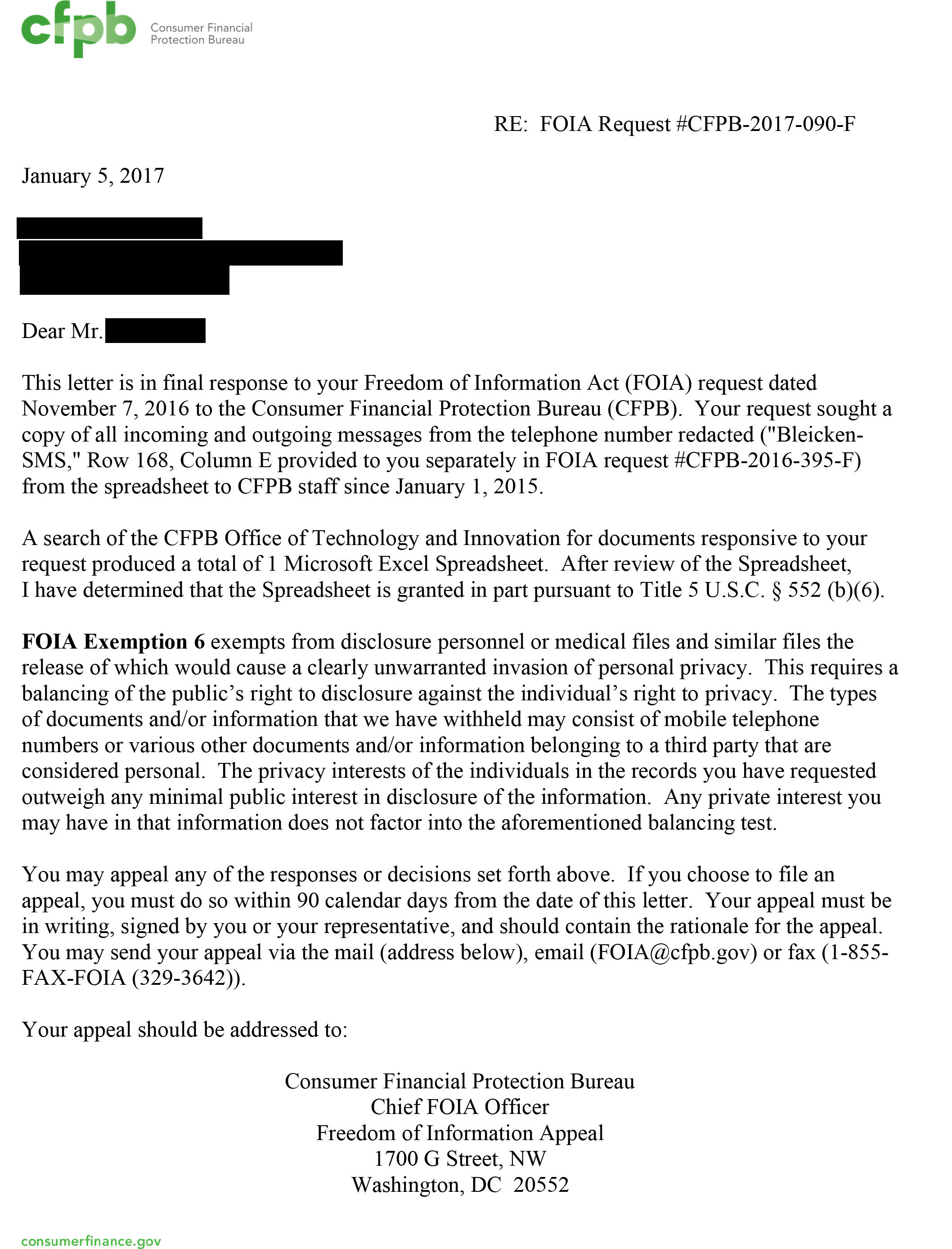 Letter in response to FOIA request, releasing texts and voicemails to and from CFPB staffers to and from Richard Cordray’s private line, provided via a source.

These messages were collected in a spreadsheet. In this collection, “(b)(6)” in the “To” and “From” column refers to Cordray. It can be viewed/downloaded here. 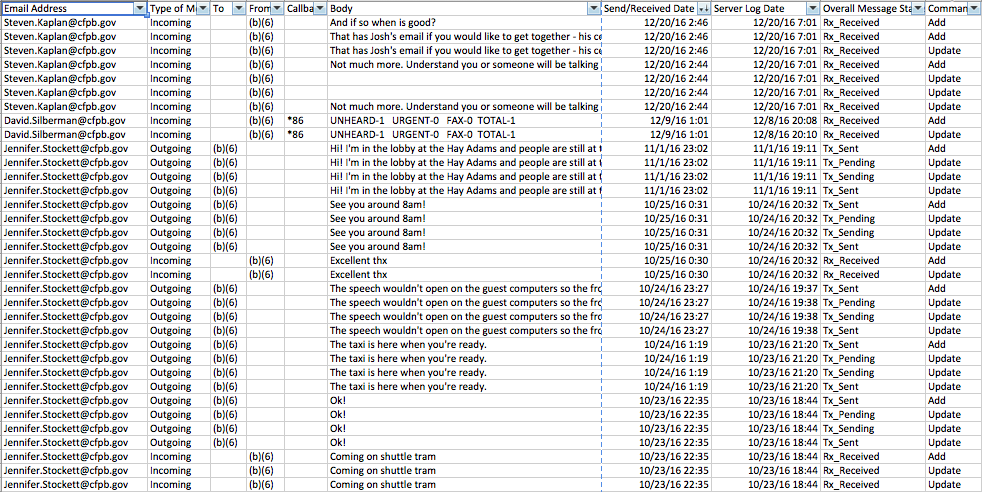 Screen shot of Excel spreadsheet collection of Cordray’s texts. Full document can be downloaded above.

Cordray’s use of a private device is not in and of itself against the rules, as long as he followed them.

But the CFPB told our source, in response to a FOIA request on Aug. 31, 2016, that it had no official records for Cordray’s texts going back to Jan. 1, 2015, indicating that he had not appropriately created a record of the messages.

The Daily Caller reached out to the CFPB for comment. A CFPB spokesperson told TheDC, “Circumstances such as travel or a dead Blackberry battery sometimes lead Bureau employees to use a personal device. These text messages between Director Cordray and CFPB employees were captured in the Bureau’s electronic storage system and produced to the public after a FOIA request.”

TheDC asked a follow up question: “The messages were able to be released to the public via FOIA because they were with other CFPB employees. As per the response to the FOIA request on August 31st, 2016, there were no official records of Richard Cordray’s private messages, despite the fact he was conducting business on a private device on and off since January 2015. Since no official records for Richard Cordray were found in the initial FOIA request, are we to infer that he has been traveling or had a dead Blackberry battery since January 1, 2015?”

The CFPB did not respond to this question by press time.

A recent court decision in October 2016 ruled that the structure of the CFPB is unconstitutional because the president doesn’t have power to fire the director. The CFPB was a creation of Elizabeth Warren and created so that directors can only be dismissed with cause.

It’s not clear if President Donald Trump has the power to dismiss Cordray without cause. Many Republicans would like to see Cordray go. (RELATED: This Is The Most Partisan Agency In The Entire Federal Government, According To FEC Records)