If you had asked me that question a week ago, I probably would’ve said, “Nah, just let him keep stepping on that rake.” But now the rules have changed, apparently.

That is not a brainteaser or a hypothetical question posed by a magazine on Twitter. It is an actual question bouncing around the internet after an attack on a well-known far-right activist, Richard B. Spencer, in Washington after the inauguration of Donald J. Trump as president on Friday.

Mr. Spencer, who is credited with coining the term alt-right and describes himself as an “identitarian,” was punched in the head on Inauguration Day by a person clad in black as he was being interviewed by a journalist.

So I guess I’m equally ambivalent about whether it’s okay to punch Liam Stack. Maybe, maybe not. Who can say?

I reject Richard Spencer’s ideas, and he’s not invited to my birthday party. Never mind that I would barely even know who he is if a masked black-bloc jackass hadn’t run up and punched him on-camera. He’s a ridiculous fringe figure, a pesky memelord trolling the “normies” with his pseudo-Nazi babbling. At the time of the attack, he was explaining his cartoon-frog lapel pin to a camera crew, not shipping a trainload of Jews to Treblinka. He’s a nobody. He’s a joke. He’s a cosplayer.

But now, the smart fellers have elevated him to Shitlord Hitler. And it’s okay to punch him whenever you see him, because he’s a “Nazi.” I mean, think about it: Indiana Jones punched Nazis. Remember? 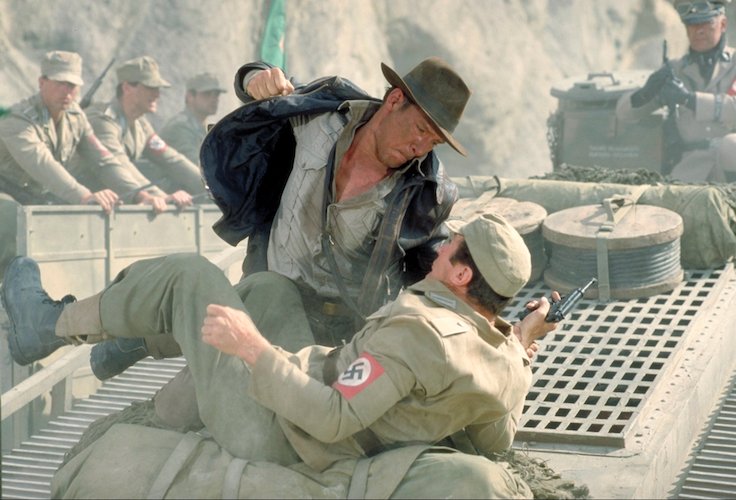 Of course, Indy also did this:

Well, let’s overlook that second example. Sure, far more Muslims have killed Americans over the past 15 years than Nazis have, but Muslims are designated victims. We don’t want anybody emulating Indy’s behavior in that scene. I guess even Nazi-punchers can be racist sometimes!

What if that masked coward had seen somebody who resembled Richard Spencer, with a similar dumb haircut and a similar dumb suit, and punched that guy in the head? Would that be justified? Should we cheer when people are beat up for having no sense of style?

Because I’ve seen how you people dress.

And if it’s okay to punch Nazis, how about commies? Communists are responsible for even more deaths over the past century than the Nazis were. Does that mean I can do the same thing to, say, Michael Moore?

Of course not. That’s stupid. You shouldn’t physically attack people for saying things you don’t like, and you shouldn’t laugh and cheer when you see other people do it.

Because if this becomes the new norm, it’s only a matter of time before somebody labels you an undesirable. Before it’s okay to attack you in the street for saying things you’re not supposed to say.