Reporters contacting Breitbart News beware: If you get in touch with the site’s Washington Political Editor Matthew Boyle for comment on a story, he may try to completely screw you over.

Case in point: On Tuesday, Boyle played hardball with The Atlantic‘s Rosie Gray.

When Gray requested Boyle’s assistance for a story, he gave her an ultimatum: Denounce BuzzFeed — Gray’s former employer — or don’t let the door hit you on the ass on your way out.

In other words, Boyle wanted Gray to “publicly denounce” BuzzFeed for publishing a 35-page dossier of compromising details of content Russia had allegedly obtained about President Trump. Trump has since called the dossier “fake news” and has referred to BuzzFeed and CNN as “fake news” sites.

Gray came clean on Twitter Tuesday afternoon so everyone would know how Boyle tried to manipulate her.

Gray’s conversation with Boyle was not off-the-record. So Boyle — after he ridiculously tried to manipulate Gray — published a story that had Gray being severely critical of her former employer.

Here’s how Boyle translated Gray’s comments to him.

“Rosie Gray, an ex-BuzzFeed reporter who now works at The Atlantic magazine, told Breitbart News exclusively that she disagrees with the decision her old editor, BuzzFeed’s Ben Smith, made to run a fake news dossier against President Donald Trump accusing the then-president-elect of having untoward relations with Russia.”

He then quoted her saying this: “’I would not have made that decision to run that,'” Gray told Breitbart News on Tuesday when asked if she would have run either the BuzzFeed story containing the dossier or the previous CNN piece on live television and online which aimed to lend credibility to the dossier without actually publishing it.”

Boyle threw her a bone by writing that “Gray does still consider Smith a mentor and a friend, however.”

Funny, Boyle made no mention of the absurd ultimatum he gave Gray in exchange for his cooperation.

Gray already covered BuzzFeed‘s decision to publish the dossier in The Atlantic. But she wasn’t critical of her former pub. So Boyle tried to use her desire to write a story involving Breitbart News as leverage to make her burn a bridge with her former employer.

Boyle called Gray “part of a group of discredited ex-BuzzFeed staffers who fled the publication in a recent mass exodus.”

He described her aforementioned tweets an “unhinged Tweetstorm.”

Gray responded to Boyle’s unusual public relations tactic by publishing a tense text message exchange she had with him. He didn’t seem to care and published the whole thing on Breitbart News.

Boyle is in gray and Gray is in blue. 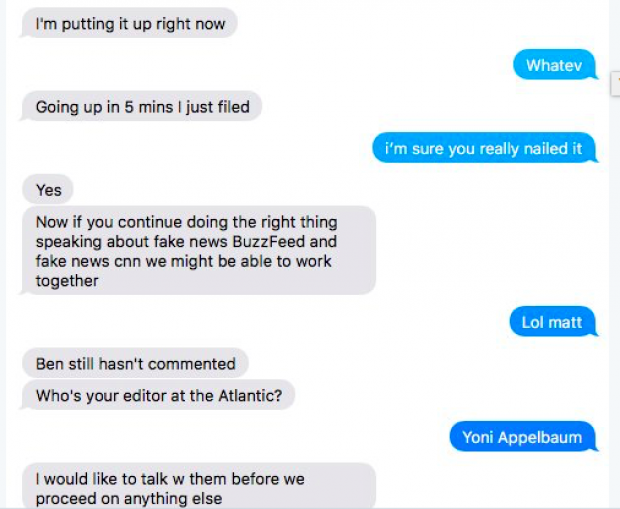 No doubt, this will make Boyle’s BFF and former boss, Steve Bannon — now a senior advisor to Trump — burst with pride.