Donna Rice Hughes is adamant about a few things this week.

“I believe that now is the time for our country to heal and unify and not to divide,” Rice Hughes said in a phone interview with The Mirror. “At then same time, our right to protest and free speech is valuable and a right that we have as Americans. I do think it should have been better called the Anti-Trump, Pro-Abortion March.”

She complained that women with opposing views were excluded.

“Certainly all women were not included, some were excluded, such as conservative women and women who chose Donald Trump over Hillary Clinton,” said Hughes, the President and CEO of Enough is Enough, a non-profit that works to make the Internet a safer place for children and families.

(Technically no one was turned away from marching, but it was openly billed as a pro-choice, liberal march. Some pro-life organizations were removed from a march sponsorship list, but they were not told not to come. Still, this probably wasn’t the warmest approach to inclusiveness.)

Rice Hughes is among those who voted for Trump. “I was supportive of Donald Trump,” she said. “I did like him from the beginning because I believed he could win and would win.”

She met him at a CPAC Convention a few years ago. I was tempted to ask if he hit on her or expressed anything about her looks, but yes, I refrained. “I was impressed with how down-to-earth he is,” she said.

She followed that up by gushing about all the Republicans who ran for president this cycle. “I have to say the candidates running on the GOP were so impressive,” she said as my eyes rolled into the back of my head as I recalled Carly Fiorina‘s endless, annoying, planned and practiced debate filibusters. “I really liked all of them and would have supported any of them.”

Like many Republicans and the Secret Service, Rice Hughes didn’t appreciate Madonna‘s presence at the march.

Which makes sense since the singer said she has thought a lot about blowing up the White House. She also said “fuck” twice, which is offensive in certain circles. “I felt that Madonna has always had an opportunity to use her platform for good,” said Rice Hughes. “However, I don’t think she has always done that and certainly didn’t do that Saturday. For her to use rhetoric hat was foul and vulgar was atrocious. It belittles her and it was negative.”

In Rice Hughes’s mind, everyone is naturally drawn to Trump (as evidenced as all the huge marches protesting his presidency around the country).

“Donald Trump appeals to men, women, poor and rich. I for one was very heartened by his Inaugural address,” she said without so much as emitting a laugh. (Some people thought the speech was strong and real — I’ve really not heard anyone say they were “heartened” by it.)

Getting back to that terrible march that drew millions of women in pink “Pussy” hats to Washington on the day after he was sworn into office, Rice Hughes said, “I find it troubling that i don’t believe it’s going to do anything constructive. It’s important for us to find dialogue.”

And then I asked her about Gary Hart.

Which I thought might be the end of our friendly chat.

But it wasn’t. There was, however, a grand pause.

I asked Rice Hughes if it was troubling for her that she is most known for her alleged affair with Hart in 1992. At the time, reporters were hot on the scent that the presidential hopeful was having an affair. He challenged the media to follow him. And they did — which resulted in a sexy picture of Donna Rice on the boat called “Monkey Business” with Hart. 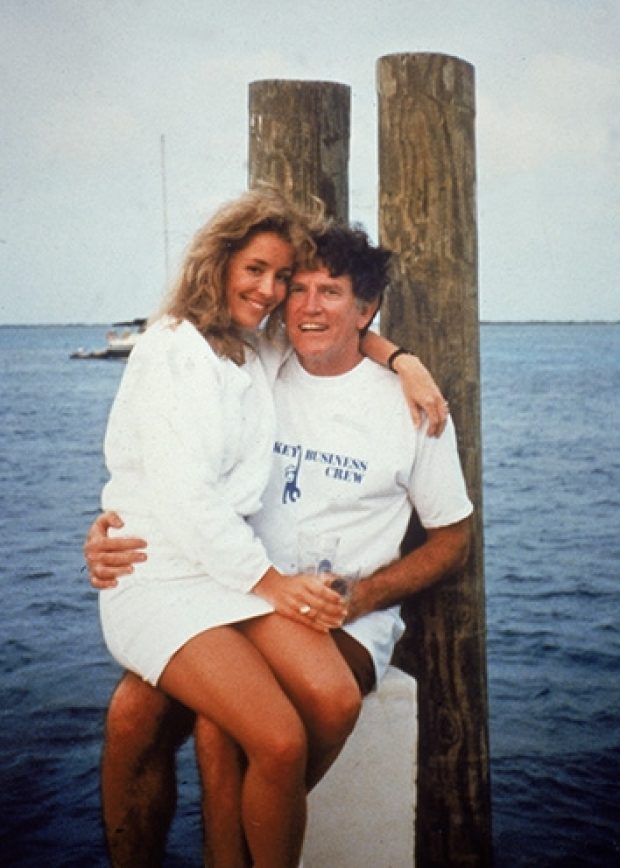 When she finally spoke again, she said, “No, actually, that was over 30 years ago. If you look at my website I’ve devoted 23 years to protecting children. I don’t assume that people know about something that happened 30 years ago because I’ve given over 4500 interviews on Internet safety.”

She called the whole thing “negative” and referred to it as “a mistake.” She said, “I walked away from millions of dollars from that.”

Rice Hughes told me she hopes she’s “not known for that mistake.”

Longtime ABC reporter Barbara Walters, whom she considers a close friend, has interviewed her five times. So it’s not as if Rice Hughes won’t address the topic. “I’m a woman, I get it,” she said. “I also understand what it feels like to be objectified.”

So what does she think of the many women who have come forward to say that Trump has groped them or otherwise touched them against their will? “I think it’s very hard to tell to be perfectly honest,” she said. “There was so many conflicting stories there. Many of those stories were debunked,” she said. “Who’s to know?”

Rice Hughes believes wholeheartedly that she can back Trump but not agree with everything he has ever said or done. “We need to let this extraordinary group of people do their job,” she said. “Don’t throw stones. Talk.”

In February, Rice is instituting a “Take The High Road” campaign.

“It’s time for the pendulum swing back to where we treat one another kindly,” she said, amid Trump continuing to declare journalists as the “most dishonest” people on Earth. “That’s what our country needs. [The march] didn’t do anything to build dialogue. It created a deeper divide. That part makes me sad. We bleed the same blood. It’s time to come together.”

Speaking of journalists, Rice Hughes has a wide array of TV correspondents she likes to read and watch.

The list off the top of her head includes everyone from Fox News’ Bill O’Reilly, Shannon Bream and Sean Hannity to  CBS’s Scott Pelley, CNN’s Anderson Cooper and Erin Burnett, Yahoo! News‘s Katie Couric and Oprah.

She wants it in her women’s marches, too.

NOTE TO READERS: Rice Hughes’ publicist emailed me after my story published to insist that I put the word “alleged” before the word affair. “It was an alleged affair, nothing was proven please make the necessary changes,” the publicist wrote. I asked, “Does she deny the affair?” At the publicist’s request, I placed the word “alleged” above twice. I do hope, however, that she will answer my question.

NOTE TO READERS II: I have added three uses of the word “alleged” to my story at the request of Rice Hughes’s publicist. I have italicized them because they were added after I originally published the story. Also: I have repeated asked the publicist if Rice Hughes denies the affair and she will not answer me. I believe that by italicizing the word it helps reflect what I am explaining here which is that the publicist made the request, or I should say, the demand. I could have used an asterisk. I went with italics.