Kellyanne Conway said that the administration has a right to “call out” members of the media who regularly mock Donald Trump. 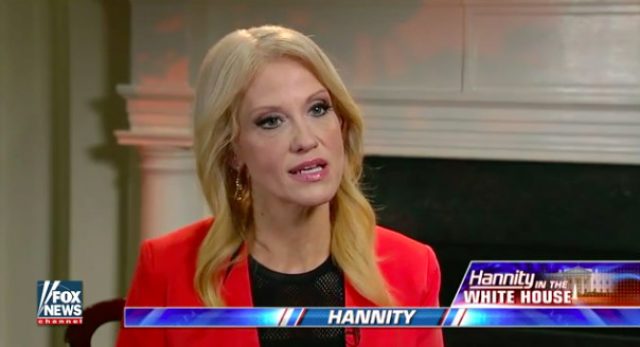 The counselor to the president told Sean Hannity during an interview Monday that it’s clear Trump is treated differently by the press than Barack Obama or Hillary Clinton would be.

“It hardly qualifies as breaking news to say that,” Conway said. “President Obama, especially in his first couple days in office, was treated much differently than Donald Trump. We know that and we’re going to deal with that, but it would be nice if people showed respect of the office of the president and gave him a chance.”

“If they want to call themselves journalists and reporters, they ought to think about what they’re doing,” she continued. (RELATED: Kellyanne Conway Was Grilled By Seth Meyers About Allegations That Russia Has Dirt On Trump)

“If they snark, if they roll their eyes, if their Twitter feed is filled with 92 percent anti-Trump tweets, they’re not being reporters, they’re being opinion columnists. They’re being professional political hacks and pundits, and we have a right to call that out.”

Conway, who received Secret Service protection after someone delivered “a white powder substance to her house,” said the president called her after her interview with Chuck Todd on “Meet the Press” and was “glowing” about her performance.

“When you are laughing at me on live television — the highest ranking woman in the White House that’s not a family member…” (RELATED: The Women Of ‘The View’ Turn On Kellyanne Conway: You Sound ‘Delusional’)