A former employee “compromised” the official Badlands National Park (BNP) Twitter account Tuesday and published a series of tweets about global warming that seemingly have nothing to do with the park’s mission. 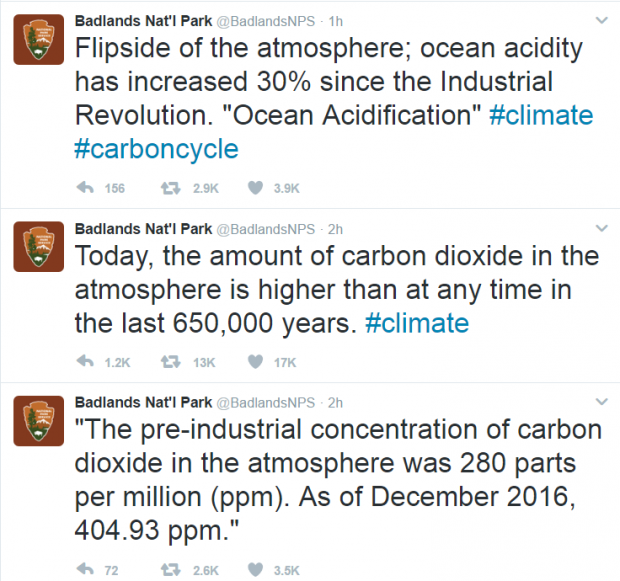 The NPS “preserves unimpaired the natural and cultural resources and values of the National Park System for the enjoyment, education, and inspiration of this and future generations,” according to their website.

Official Badlands park tweets generally have to do with animal species living in the park, its history and quotes from conservationists. Every once in a while there’s a tweet about climate change, but not stacked together like Tuesday’s.

The National Park Service tells me those @BadlandsNPS tweets were from a former employee and the account was “compromised.” pic.twitter.com/RfmFSyebdG

The Park Service also retweeted an Esquire.com article claiming all mentions of “climate change” were scrubbed from Whitehouse.gov. Their Twitter account was temporarily shut down, but was up and running again Saturday with an apology.

The Badlands tweets also come amid news federal agencies under a “gag order” not to use social media or speak with members of the press. The Trump administration says they’re looking into the matter, but federal employees could be actively defying the order.

Some Twitter users seemed to think so, including reporters.

I salute you, Badlands National Park tweeter who is probably going to get fired but is going out in style. https://t.co/LrcH91IOuJ

The National Hurricane Center had its own social media snafu over the weekend, sharing a Facebook statement from Vermont Sen. Bernie Sanders critical of Trump. NHC apologized for sharing the political post, but then quickly deleted its apology.

National Oceanic and Atmospheric Administration spokesman Scott Smullen told TheDCNF they’re “investigating the cause and we have taken additional steps to ensure the security of the site and prevent the re-occurrence of such issues.”

(Editor’s Note: This story has been updated to reflect it was a former NPS employee that published the global warming tweets.)