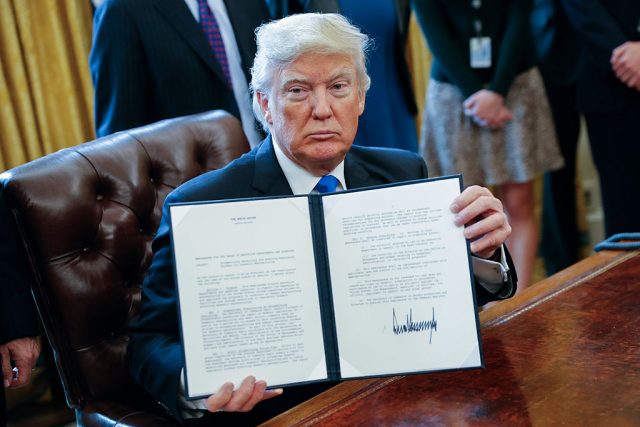 The first order will focus on building the wall along the Mexican border along with expanding resources for the Department of Homeland Security and U.S. Immigration and Customs Enforcement. Spicer said the wall was “more than a campaign promise” and “common sense first step to securing border.”

“One way or another, Mexico will pay for it,” Spicer said.

The press secretary also said the administration is “creating more detention space for immigrants along southern border” and will end the “dangerous catch and release policy.” Spicer said the first executive order will “priotitize prosection and deportation of immigrants who have broken American laws.”

“They will get one-way tickets to their country of origin,” Spicer said.

The second order will strip federal grant money from sanctuary cities, which do not prosecute illegal immigrants, and restore the “Secure Communities Program.” Spicer said the State Department will ensure that illegal immigrants are returned to their country or origin.

“Federal agenceis will unapologetically enforce law,” Spicer said. “No ifs, ands or butts. Americans will no longer have to subsidize this.”

The president is scheduled to visit the Department of Homeland Security at 1:25 p.m. EST Wednesday.