As translated by The Mirror, Nieto announced on Twitter, “This morning we’ve informed the White House that the meeting scheduled for next Tuesday has been canceled.”

The decision to nix the Washington meeting came after Trump insisted that Mexico will reimburse the United States for the alleged wall he intends to have built. During his presidential race, Trump constantly insisted at his rallies that Mexico would pay for the wall, despite declarations from Mexico that no such thing would ever happen. 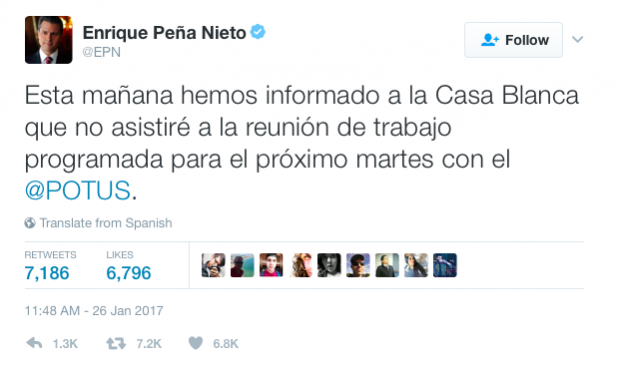 Trump pre-empted Nieto’s announcement by tweeting that if Mexico won’t pay for the wall that the meeting should be canceled.

As a Washington journalist put it to The Mirror, “I guess there’s nothing to taco ’bout.”

“This is not a good start,” MSNBC’s Andrea Mitchell said Thursday on her show.

Indeed, it doesn’t look like these two men will be amigos anytime soon.