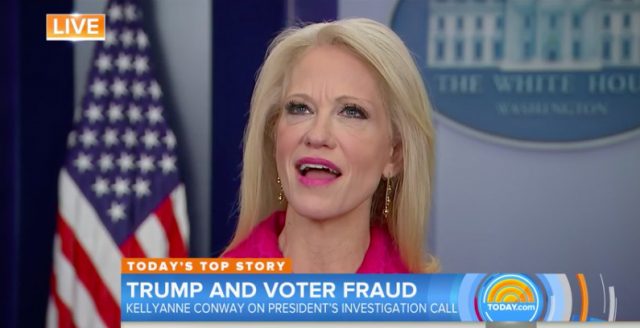 “I just want to correct a part of your reporting,” Conway said on the “Today” show Thursday. “I talked last night with Tiffany Trump and she said it is flatly false that she is registered to vote in two states. I recall talking with Tiffany all through the fall when she was trying to make sure she could re-register in New York to vote for her father. She had been registered in Pennsylvania and went through the process.”

Conway said she had not spoken with Stephen Bannon, but “could guarantee he didn’t vote in two states.” (RELATED: Trump: Matt Lauer Did A Fantastic Job Moderating The Presidential Forum)

“But doesn’t it prove the point that even people who are trying to follow the law, they haven’t been purged from the roles where they clearly have said, ‘Take me off the list’?” Conway asked.

“No,” Lauer said. “It proves the point that someone can be registered to vote in two state and not vote illegally in two states and sway an election.”

“There’s no evidence of that,” Conway said.

“That’s what the president claimed,” Lauer said. “He claimed that people voted illegally.”

As of Thursday morning, NBC is reporting that a Philadelphia County board of elections official said Tiffany is still registered to vote in two states — Pennsylvania, where she went to college, and New York, where she lives now. (RELATED: Matt Lauer ‘Burst Out Crying’ When Obama Gave Biden His Presidential Medal Of Freedom)