Arex is a name most American shooters don’t yet recognize. Established more than 20 years ago, the Slovenian company has been making products for the defense industry as well as parts for various firearm manufacturers. Just recently the company introduced its first handgun, the Rex Zero 1S, which is being imported by FIME Group.

Designed and manufactured completely in-house, the new pistol bears more than a passing resemblance to the SIG Sauer P226 pistol, however, it has some important differences. FIME Group is offering three different Rex Zero variants: the full-size Standard model tested here, a Tactical model with a threaded muzzle, elevated sights and three optics-mounting plates, and a Compact model with shortened dimensions and decreased capacity.

The Rex Zero 1S is a 9 mm Luger-chambered semi-automatic pistol with a capacity of 17 rounds. It locks up by way of the barrel’s breech block engaging the slide’s ejection port. Its trigger mechanism is double-action on the first shot with each subsequent shot firing single-action, until the hammer is decocked. Or shooters can carry the pistol “cocked and locked,” with the chamber loaded, the hammer back and the manual thumb safety applied.

Arex machines the pistol’s major components from bar stock. The slide is made from chrome-moly steel and the frame from 7075 aluminum. The frame is hard-anodized and has a hardened steel barrel-unlocking block inserted. Arex machines the barrel from bar stock and uses the cold-hammer-forged method of rifling. Both the slide and barrel are treated with the company’s proprietary nitrocarburizing surface process to increase hardness and provide corrosion resistance.

Immediately noticeable is the Rex Zero 1S’s long dustcover, which adds rigidity to the frame and incorporates full-length slide rails. MIL-STD 1913 Picatinny rail is machined into the bottom of the frame’s dustcover for the attachment of lights and/or lasers. Examining the fit of the slide to the frame revealed virtually no vertical or horizontal play.

The Rex Zero 1S’s full-profile slide helps attenuate the already mild recoil of this full-size service gun. It is bushingless in design, and has a loaded-chamber indicator and an internal extractor. Cocking serrations fore and aft help the shooter charge the chamber—even with wet hands. The pistol uses a single recoil spring and a full-length, steel recoil-spring guide. Both the front and rear fixed sights are dovetailed into the slide and are drift-adjustable for windage.

Externally the Rex Zero 1S appears to be very similar to SIG Sauer’s P226 pistol, however, internally there are several differences, and the two pistols share no parts. Both the front (l.) and rear (r.) sights, presented in the popular three-dot pattern, are dovetailed into the slide and are drift-adjustable for windage.
–

The pistol’s fire-control system holds a number of innovations. Its slide stop also pulls double duty as a decocking lever. Pushing down allows the slide to go forward into battery. Depressing the lever farther down decocks the hammer. At the rear of the frame is a bilateral manual safety. Pushing up on the lever disengages the trigger bar from the sear. The safety can be applied with the hammer down or with it cocked. Even with the safety engaged, the user can manipulate the slide to load or unload the pistol. The hammer can also be decocked while the manual safety is engaged. To disengage the safety, the user simply pushes the lever down in the same manner as the M1911 thumb safety. There is a passive firing pin safety that protects against accidents caused by dropping the gun on its muzzle, and it is disengaged only when the trigger is fully depressed.

The Rex Zero 1S uses a bilateral magazine release located at the juncture of the trigger guard and frame. The release can easily be activated by either the thumb or trigger finger. Vertical grooves are machined into the front and rear frame straps, and black synthetic stocks are attached with two button-head screws each. The trigger guard is elongated to provide plenty of room for a gloved trigger finger and is serrated on its face. Arex machines the frame and fits a pin at its heel for use with a lanyard.

To evaluate the Rex Zero 1S for accuracy we placed our targets at 25 yds. and fired all groups from a seated rest utilizing a Millett Benchmaster for support. All groups were fired in single-action mode. The Rex Zero 1S’s double-action trigger is relatively long and heavy—registering just over 13 lbs. But the single-action trigger is very manageable, breaking at 5 lbs., 4 ozs. after about 3/8″ of take-up. The sights are low-profile, three-dot, combat-style and were well-regulated for the distance. Hornady’s 147-gr. XTP bullets produced the best group, measuring just 0.87″ for five shots.

Disassembly of the Rex Zero 1S is quick and easy and requires no tools. First apply the manual thumb safety and remove the magazine. Ensure that the gun is clear and lock the slide to the rear. Rotate the take-down lever, located on the left side of the frame, downward 90 degrees. Depress the slide lock and allow the slide to run off the frame rails. The recoil spring and guide can now be removed, freeing up the barrel. Reassembly is in the reverse order.

While we had the Rex Zero 1S disassembled we couldn’t resist the temptation to see if any parts would interchange with those of a SIG P226 we had on hand. The answer is no. The slide, barrel and frame are of different dimensions, and nothing was compatible from one gun to the other. Even magazines would not interchange.

During our evaluation we fired more than 400 rounds of various ammunition through the pistol with no stoppages or failures of any sort. Quoting from the company’s website, “Arex does not claim to have a revolutionary design but rather have improved manufacturing processes and quality control. The entire design was performance driven and oriented towards long-term durability with a service life of 30,000 [rounds].” We found the Rex Zero 1S to be well-made, and it possessed the accuracy and reliability needed for serious defense and sport use. 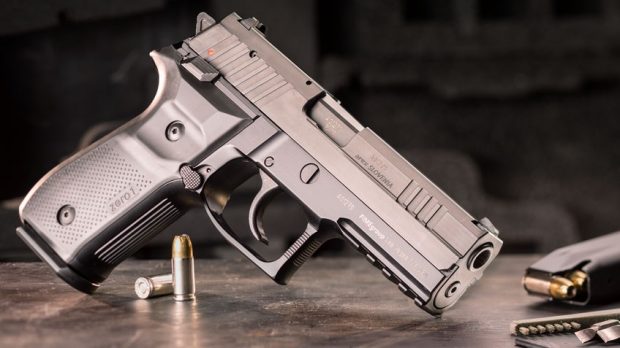