Celebrities are freaking out after president Donald Trump signed an executive order on Friday that temporarily prevents immigrants and refugees from seven countries from entering the U.S. for at least 90 days.

On Saturday, performers who were also upset about Trump beating Hillary Clinton in the election blasted the president and called the executive order “disgusting,” awful, and “heinous,” on Twitter. They called on followers to join in protests against the order across the United States. (RELATED: Angry Celebrities Call For Electoral College Coup Against Donald Trump [VIDEO]) 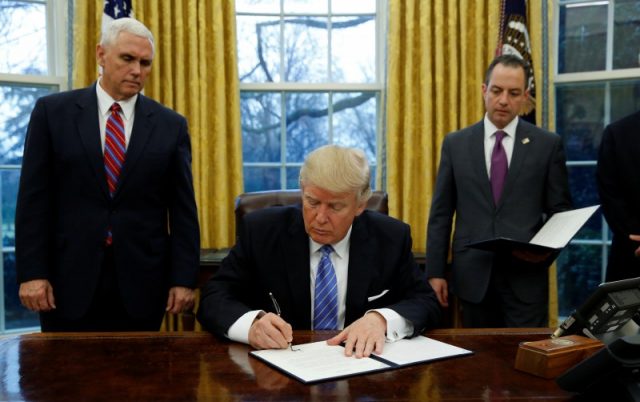 Will anyone stand up for them? Any politicians? https://t.co/8buaPXgyHV

Along with liar,racist,misogynist,fool,infantile,sick,narcissist-with the Muslim ban we can now add heartless & evil to DT’s repertoire.

To our Muslim neighbors in the world: I & tens of millions of others are so very sorry. The majority of Americans did not vote 4 this man.

Trump wants us at war w/ the entire Muslim world. Who wants to die for Donald J. Trump? Do YOU want 2 die 4 Trump? Everyone to JFK demo now!

My best friend, Alaa Mohammad Khaled, is Muslim. His parents were Palestinian refugees. His brother is DJ Khaled. #RefugeesWelcome pic.twitter.com/qXOapgvvF7

There are a billion and a half Muslims in the world. If we were all dangerous you wouldn’t be around to sign a #MuslimBan

Hey @mike_pence @SenJohnMcCain @SpeakerRyan, you should be ashamed of yourselves. On your deathbeds you will know you made the world worse.

How to make terrorists:

1. Ban everybody from a certain group from entering the country.
2. Wait.

Sick to my stomach today about the #MuslimBan
Don’t understand why? Go to @Stl_Manifest & learn the awful history of US rejecting refugees

Refugees are FLEEING TERROR. They are not terrorists. #muslimban

To All Trumpsters & BernieBros alike, who, with dripping contempt, called me a “Fearmonger” –F¥ck You. #Muslimban #wall

.@realDonaldTrump FYI this endangers our armed forces in the future. Who would want to help us, when this is how we repay interpreters? https://t.co/JpaeRb84uz

Life is short & hard enough for everyone. The fact that our evil piece of shit President is already causing so much misery is unforgivable.

THIS ! Don’t normalise #MuslimBan it is a heinous heinous act. https://t.co/6cJukZGeKv

This #MuslimBan is disgusting and disturbing. #MakeAmericaHateAgain

THESE are the HUMAN BEINGS Trump banned today. REFUGEES fleeing ISIS. Children. Their families. Shame on him. May God help us. https://t.co/6fHeqEAaMj