The average amount of sugar Americans eat in a year has dropped since 2000, but the number of overweight people continues to rise despite claims sugar is the key factor in obesity.

Sugar is the latest suspect in the war against obesity. The past few years, diet advocates have declared sugar the new tobacco, and claim that consumption of sweetened foods, particularly soda, is the biggest driver of obesity. Philadelphia, Pa., and other cities across the country have even added taxes to sugary beverages.

The rate of obesity in the U.S. has “almost tripled for adults and more than tripled for children and adolescents,” according to a Department of Agriculture (USDA) study on what Americans eat.

The amount of sugar each person consumes has dropped 14 percent, the study, released Friday, says. Americans consumed, on average, 131 pounds of sugar per person in 2014, 14 percent less than 1999 and the lowest amount since the early 1990s.

While sugar consumption is going down, Americans still consume around 83 percent more added sugars than the government recommends in its 2015-2020 Dietary Guidelines for Americans, which limits sugar intake to 12.5 teaspoons a day. 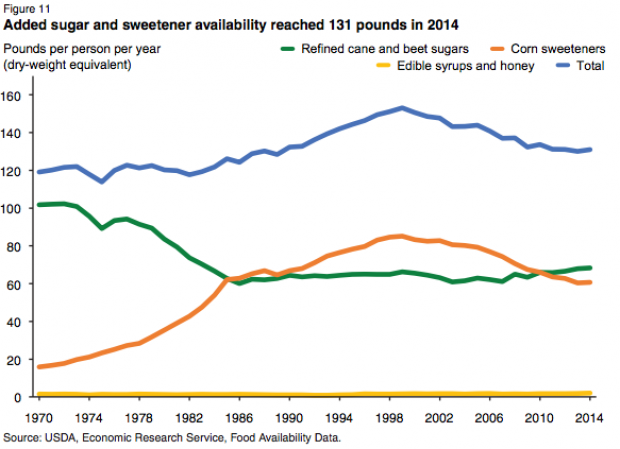 A big reason for the decline in sugar intake between 200 and 2014 is the decrease in corn syrup, the sweetener used in most sodas and energy drinks. “Rising sales of zero-calorie drinks, bottled water, and diet soft drinks influenced the drop” in the consumption of high fructose corn syrup, the study says.

While Americans were reducing the amount of sugar-added foods and beverages they consumed, the obesity rate went up. From around 1999 to 2014, “a significant increase in obesity was observed in both adults and youth,” the Centers for Disease Control and Prevention reported last year. 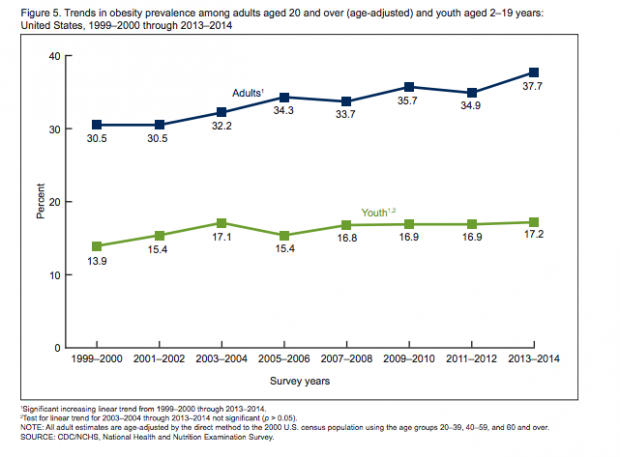 Obesity rates in U.S. adults and children from 1999-2014 (Image: Centers for Disease Control and Prevention)

The USDA’s study also notes that consumption of proteins — which includes meat, fish, legumes and nuts — is nearly 30 percent higher than the Food and Drug Administration’s recommended daily guidelines.