A Colorado state representative announced a bill Monday that would allow victims of certain crimes committed by illegal immigrants to sue state and local politicians who defy federal immigration authorities seeking to enforce the law, multiple news outlets are reporting.

Republican state Rep. Dave Williams, who is Hispanic, said he wants to strip the “immunity” from Democratic politicians who “place Coloradans in danger because of the sanctuary city policies that they created and continue to implement,” the Denver Post reported.

“As the first Latino elected to Colorado House District 15, I think it’s important that we do all we can to uphold the rule of law and ensure all communities, regardless of race or ethnicity, are protected from dangerous policies that are forced on us by radical, out-of-touch politicians who continually sell out to an unlawful agenda that increases the number of criminals, and needless deaths among our fellow citizens,” Williams said, according to The Colorado Statesman.

Williams called out by name Denver Mayor Michael Hancock, who said on Friday that he would “welcome” the sanctuary city label for Denver.

“If being a sanctuary city means that we value taking care of one another, and welcoming refugees and immigrants, then I welcome the title,” Hancock said in a video posted to YouTube, adding: “If being a sanctuary city means that our law enforcement officers are expected to do the work of federal immigration authorities, or violate the constitutional rights of any of our people, we reject that.” 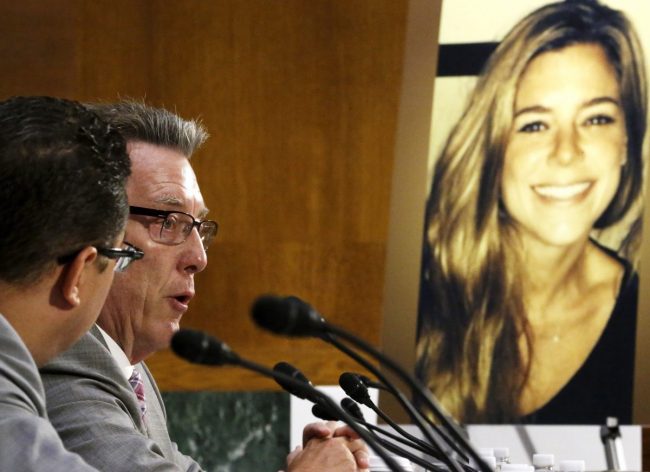 Jim Steinle (L), father of murder victim Kathryn Steinle (in photo, R), allegedly at the hands of an undocumented immigrant, testifies about his daughter’s murder during a hearing of the Senate Judiciary Committee on U.S. immigration enforcement policies, on Capitol Hill in Washington July 21, 2015. REUTERS/Jonathan Ernst