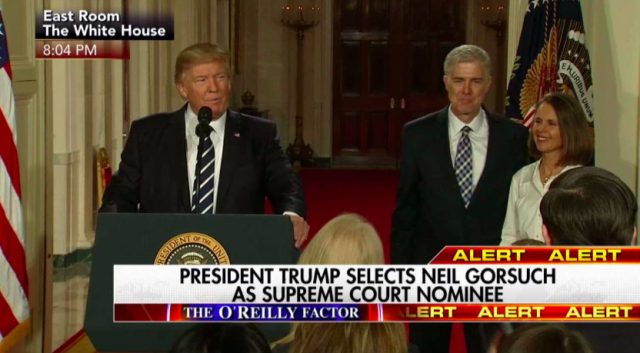 “I made a promise to the people that I would find the very best judge in the country to nominate to the Supreme Court,” Trump said Tuesday night. “Millions of people said this was the single most important decision.”

“His academics are as good as I have ever seen,” the president continued. “The qualifications of Judge Gorsuch are beyond dispute. I would like to thank Senate leadership. I only hope that both Democrats and Republicans can come together, for once, for the good of the country. Congratulations to you and your family.”

Pres. Trump says Gorsuch was confirmed to Court of Appeals by Senate "unanimously"—"can you believe that, nowadays, with what's going on?" pic.twitter.com/6pd09jl0tZ

Trump’s decision was praised by many on the right. 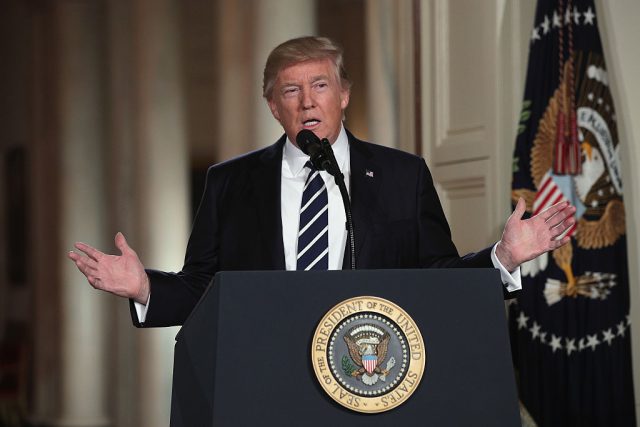 Neil Gorsuch will make an outstanding #SCOTUS justice—he has a clear record that shows he'll follow the Constitution and uphold rule of law.

Maureen Scalia is in the room. Gorsuch is a great choice.

An Originalist and Constitutionalist. No thanks to NRO, WSJ, and Weekly Standard. Thank you Irredeemable deplorable friends. U did this!!

I look at that lovely couple, Judge Gorsuch & his wife, and think about how they are about to be viciously slandered by the left.

Thank you President @realDonaldTrump for nominating Neil Gorsuch to be our next #SCOTUS Justice! #TeaParty https://t.co/nfV21F7BDQ

My fellow members of the Judiciary Committee and I are ready to get to work to get Judge Gorsuch confirmed. pic.twitter.com/MnHZWYouSA

No one can fill Nino Scalia's shoes, but lawyers and law profs whom I trust think Gorsuch would have as good a chance as anyone to do so. https://t.co/Gi6GeSj5dZ

Judge Neil Gorsuch is a phenomenal nominee for the #SCOTUS. https://t.co/qQIeFmXE3O pic.twitter.com/QoiGqCZ2dH

Neil Gorsuch is a great pick by President Trump. A strong originalist who will serve the Supreme Court well.

.@POTUS made a smart move picking Gorsuch for SCOTUS. W/his resume, he will be a strong defender of the Constitution.https://t.co/AfIZAE55Tp

In nominating Judge Gorsuch to the Supreme Court, President Trump has chosen a well-respected judge. My statement: https://t.co/TSkO8OIThR

“With the nomination of Judge Gorsuch, the President has clearly delivered on his campaign commitment to appoint a Justice in the mold of Antonin Scalia who would be guided by the Constitution and not by their ideological or personal views,” Blackwell said in a statement.

“I hope my colleagues in the Senate, regardless of party, will join me in thoughtfully considering Judge Gorsuch as our next Supreme Court Justice.”