Sean Spicer locked horns with an NBC reporter who questioned President Trump’s use of the word “ban” when referencing his executive order that temporarily bars the citizens of seven countries from entering the United States. 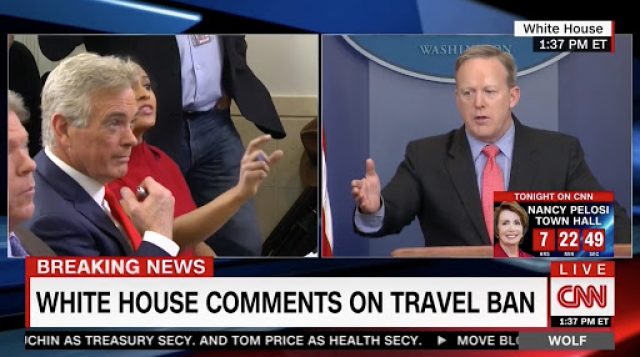 After the White House press secretary said the executive order was not a ban — “it’s to make sure people who are coming in are vetted properly, a ban would mean people can’t get in” — Kristen Welker asked why Trump used the word ban then.

If the ban were announced with a one week notice, the "bad" would rush into our country during that week. A lot of bad "dudes" out there!

“The president himself has called it a ban,” Welker asked. “Are you confused or is he confused?”

“Those are the media’s words,” Spicer said. “No, I’m not confused. Those words are derived from the media. Your network was one of the ones that just hours ago said [Homeland Security Secretary] Kelly didn’t know what was going on. With all due respect, I think you have been part of the confusion.”

Welker responded by saying that her network was simply reporting on a New York Times story claiming that Kelly had not received a “full briefing” on the executive order.

“I’m sorry that NBC’s reporting is based on the New York Times’s inaccurate reporting,” Spicer responded. “The Secretary of Homeland Security just stood up and said he was briefed. You’re calling him a liar?”

Spicer repeatedly told other reporters who were interjecting, such as Glenn Thrush, to “be polite” and “hold on.”

“I don’t believe the New York Times’s reporting is accurate,” he said.

And a few seconds later, Sean Spicer gets into a yell fest with @GlennThrush in his latest of many more press conference temper tantrums. pic.twitter.com/XCBdWtbITI