Ali, a Somali-born former Dutch politician who renounced Islam in 2002, responded on Wednesday to a resurfaced tweet from Linda Sarsour, the head of the Arab American Association of New York and a co-organizer of last month’s Women’s March.

Though Sarsour led the feminist event in Washington, D.C., she has attacked Ali and other women who have criticized radical Islam and sharia law. (RELATED: Women’s March Leader Once Threatened To Take Away Women’s Vaginas)

In 2011, Sarsour wrote in a now-deleted tweet that Ali and Brigitte Gabriel, another critic of radical Islam and sharia law, deserved to be beaten and have “their vaginas” taken away. 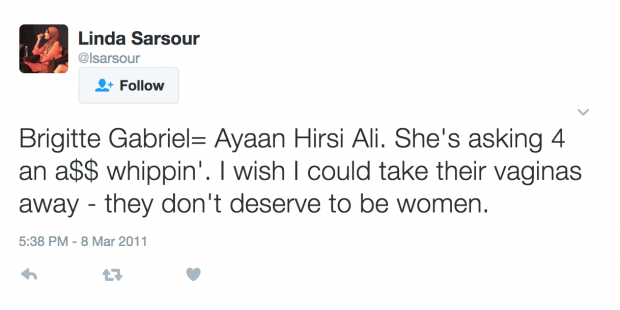 “Ms. Sarsour is hostile to me and not because she knows me, but because she’s a fake feminist,” Ali told Fox News’ Martha MacCallum on Wednesday. “Ms. Sarsour is not interested in universal human rights. She’s a defender of sharia law.”

Last month, The Daily Caller reported that Sarsour led the Women’s March despite having family ties to Hamas, the terrorist group. At a convention last month hosted by the Muslim American Society and Islamic Circle of North America, two groups tied to the Muslim Brotherhood, Sarsour posed for a picture with alleged Hamas financier Salah Sarsour (it is unclear if they are related). (RELATED: Women’s March Organizer Recently Met With Ex-Hamas Operative)

Other outlets dug up old tweets showing that Sarsour defended sharia law. In one tweet she wrote that sharia law is “reasonable.” Another showed that favorably compared Saudi Arabia to the U.S. because the former grants women paid maternity leave. She downplayed the regime’s prohibition against women driving.

The Daily Caller’s report caused a furor online and sparked the hashtag #IMarchWithLinda. Sarsour’s supporters claimed that she was being unfairly smeared by coordinated attacks from conservatives.

But according to Ali, Sarsour deserves all the criticism she has received.

“There’s no principle that demeans, degrades and dehumanizes women more than the principle of sharia law. Linda Sarsour is a defender of that,” she said.

Ali noted that Sarsour and other march organizers did not address violence women face under Islamic rule. She pointed to Boko Haram’s kidnapping of more than 200 girls in Nigeria and ISIS raping and murdering Yazidi Christian women in Iraq.

“We have threats, real threats, against women — a real war on women. Our genitals are being cut. 140 million woman have been subjected to genital mutilation — child brides,” said Ali, who is also a victim of female genital mutilation.