Comedy director Judd Apatow threatened Americans who support Donald Trump that the riots at the University of California-Berkeley Wednesday night were “just the beginning.”

In a now-deleted tweet, the “Knocked Up” director shared a link to CNN’s coverage of the riots with the message, “This is just the beginning. When will all the fools who are still supporting Trump realize what is at stake?” 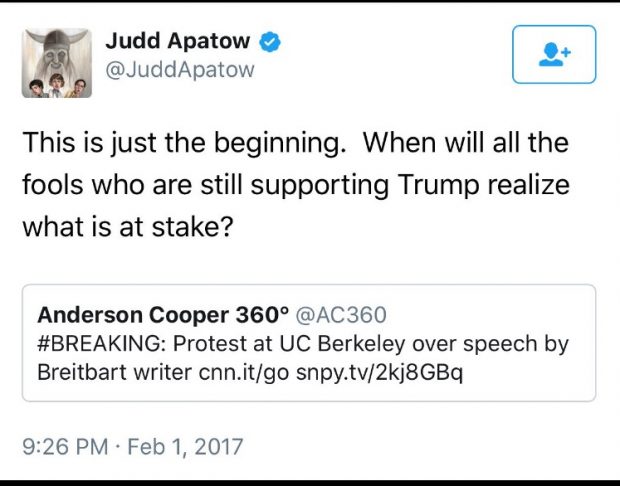 The backlash against his tweet was swift from Trump supporters and prompted Apatow to later delete it.

In a later tweet, Apatow tried to walk back the implication that he was supporting violence against his political enemies.

This is not the first time this week a prominent Hollywood figure has championed violence against political opponents. At Sunday night’s Screen Actors Guild Awards, “Stranger Things” star David Harbour called for punching people he thinks oppress the disenfranchised in a speech directed toward Trump. The crowd roared with applause from the entertainment industry’s biggest stars. (RELATED: Hollywood Gives Standing Ovation For Punching Political Foes At Awards Show)

Follow Scott on Twitter and purchase his new book, “No Campus for White Men,” which includes a foreword from Milo Yiannopoulos, on Amazon