A child throws a fit in a checkout aisle because she wants a chocolate bar. The mother caves, buying her daughter the candy. The story is the same the next time they visit the grocery store, except the little girl is emboldened by her first victory. Who isn’t familiar with such a scenario? Apparently not the fashionable American left, which has breathlessly played defense for rioters since they silenced a conservative speaker at UC Berkeley on Wednesday night.

The riots, which involved macing innocent women and beating unconscious people with poles, seems to be a generalization of that trying-to-be-edgy-but-isn’t-really meme about punching Nazis. Nazis are scumbags; this nobody denies. But you can’t trust the radical left to behave honestly with a definition. As soon as it has one in its grasp the meaning becomes unrecognizable, tortured into an alien shape for a political agenda. Violence that was once reserved for Nazis (read: virtually nobody) becomes acceptable against “alt-righters,” and then against Trump supporters, and then against anyone to the right of Hillary Clinton. There’s no limiting principle here.

Milo Yiannopoulos, who was scheduled to speak at Berkeley before frothing ideologues brutalized the campus into no-platforming him, is essentially a paleoconservative – that is, what a typical American right-winger was before the ascendance of the neoconservatives during the Cold War. Opposition to immigration and feminism and criticism of Islam are pretty standard for this perhaps more genuine conservatism, but the media nonetheless paints Milo as “far-right” or “white nationalist,” with even reputable sources like Reuters trading its credibility for hyberbole in service of wokeness.

Besides being flamboyantly gay, what distinguishes him from others of that label is the fact that he deliberately frames his views in confrontational ways. And who could fault him? His brand is so effective that the mononym “Milo” is virtually at household-levels of recognition, thanks to the media’s reflex of clutching pearls first and asking questions later. Media progressives would throw their clout behind every attempt to censor or bully him, saying that he was committing “hate speech,” despite there being no such legal concept in the United States.

For all the left’s mewling about a hatred-inciting boogeyman, all the actual violence became ended up being directed at nobody except the boogeyman himself. Reality didn’t fit the narrative. But as ever, there’s a solution: crumple definitions into the appropriate shape until you invert reality. In the upside-down space of ideology, Milo and his ilk actually committed violence, we’re supposed to believe, because their bad opinions are the same as physical harm. Violence against his fans, on the other hand, is not violence, because right-wing opinions are bad. Doesn’t make sense? It isn’t supposed to. It doesn’t have to. This was the original post-truth politics, one whose birth far in 1970s academia long predates the rise of Trump. Facts don’t matter. They are just another tool that’s instrumental to political ends. 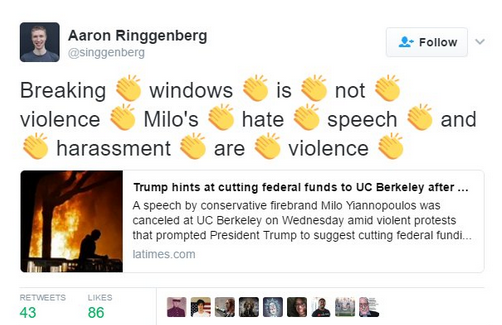 The problem for anti-fascists is that fascism has been extinct in the wild for the better part of a century, something that should be obvious to any mentally well person. We live in a society, though, where communism passes the dinner table test but sober discussion about restricting immigration  is scandalous. Only by stoking paranoia about cartoon villains is this sustainable. Violent protesters will continue to act as the enforcers for left-wing media elites who give phoned-in denouncements of riots while simultaneously telling Americans that we should probably shut up and fall in line if we don’t want our heads bashed in.

That’s the interesting thing about witch hunts: it’s always the hunters who have the power and never the witches. If witches actually wield deadly magic that makes them worth hunting, why don’t they defend themselves with it? That’s because witches don’t exist, just like fascists with any sort of meaningful power. But don’t expect facts to stop left-wing violence. It will only end when it ceases to achieve its goal of stamping out dissenting thought. This is the law of the jungle.