Mike Pence defended the president’s actions after a federal judge put a nationwide block on his executive order that temporarily bars immigrants and refugees from seven countries from entering the United States. 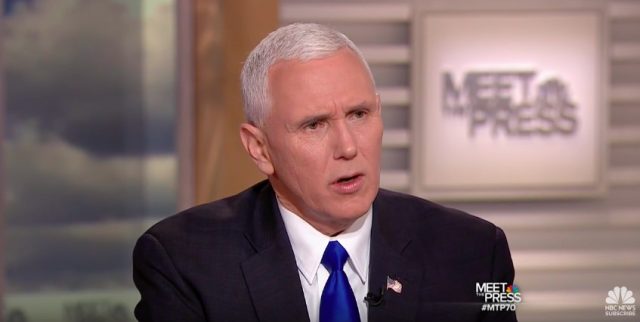 The vice president argued that President Trump’s executive order restricting immigration is constitutional during an interview with Chuck Todd on “Meet the Press” Sunday.

“I truly do believe that a majority of the American people are grateful that we have a president who is willing to take decisive action, use the authority he has under the Constitution and the law, to pause with regard to these seven countries and rethink the way that we admit people into America.”

“We live in a dangerous world,” he continued. “I think the American people welcome a president as decisive as President Trump.”

Pence said that Trump has every right to criticize the judge who blocked his order.

“Well, look, the president of the United States has every right to criticize the other two branches of government,” Pence said. “And we have a long tradition of that in this country.” (RELATED: Donald Trump Defends His Executive Order: ‘This Is Not A Muslim Ban’)

“The judge’s actions in this case, making decisions about American foreign policy and national security, it’s just very frustrating to the president, to our whole administration, to millions of Americans who want to see judges that will uphold the law and recognize the authority the president of the United States has under the Constitution to manage who comes into this country.”

The opinion of this so-called judge, which essentially takes law-enforcement away from our country, is ridiculous and will be overturned!

In a separate interview on “Fox News Sunday,” Pence said the administration would “use all legal means at our disposal to stay that order.”

“There’s simply no question under the Constitution, and frankly under federal law, that the president of the United States has the authority in the interest of national security to determine who has the right to come into this country.” (RELATED: Stephen Miller Defends Firing Of Acting AG: ‘She Betrayed Her Office’)