While the White House trotted out reps for most of the Sunday shows, no one showed up for Jake Tapper‘s “State of the Union.” CNN PR insists that it was not that the network that begged the White House for a political figure.

She says it’s not true.

But is she engaging in alternative facts? 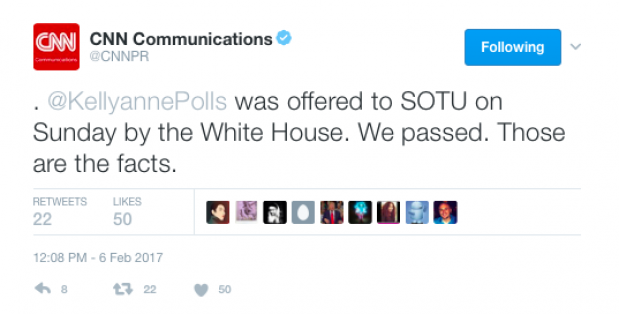 She sympathized with CNN, despite “Morning Joe” being in its own war with CNN’s “New Day,” which airs at the same time.

The Daily Beast‘s Senior Editor Ben Collins also lashed out at Conway, saying, “Kellyanne Conway is having a rough morning straight up lying on Twitter.”

The Daily Caller asked Conway for screenshots of emails as evidence. But she did not respond to a request on Twitter Direct Messaging.

Mediaite is reporting that CNN chose not to have Conway on Tapper’s “SOTU” because of “credibility issues.” Conway recently mentioned the “Bowling Green massacre” during an interview with MSNBC’s Chris Matthews. The problem was, there was no massacre. The facts: Two Iraqi refugees living Bowling Green were arrested in 2011 for trying to sell arms to al-Qaeda. She acknowledged her error with a tweet.

But since Conway has been the queen of saying the media engages in “alternative facts” few in the press are giving her an easy pass.

CNN has been in a war with the Trump White House as of late, with Trump relentlessly calling CNN “Fake News.” This was in response to CNN reporting that Russia had obtained “comprising” info on Trump. The four-person team who reported the news included Jim Sciutto, Jake Tapper, Evan Perez and Carl Bernstein. They did not report the content — which allegedly involved filming Trump with prostitutes peeing on a bed where President Obama had slept — but BuzzFeed claimed this opened the door to the site publishing the 35-dossier.

In the meantime, “Reliable Sources” host Brian Stelter is getting himself all hot and bothered about whether the President is gas lighting reporters and wondering if Trump even knows what that means. Over the weekend, The Hollywood Reporter‘s Michael Wolff went on Stelter’s show and told him his “sermons” are unnecessary and called him a “ridiculous figure.”

Question of the hour: Who is lying? CNN PR or Kellyanne Conway?