Celebrities had a meltdown Wednesday night after Jeff Sessions’ confirmation as the next attorney general. 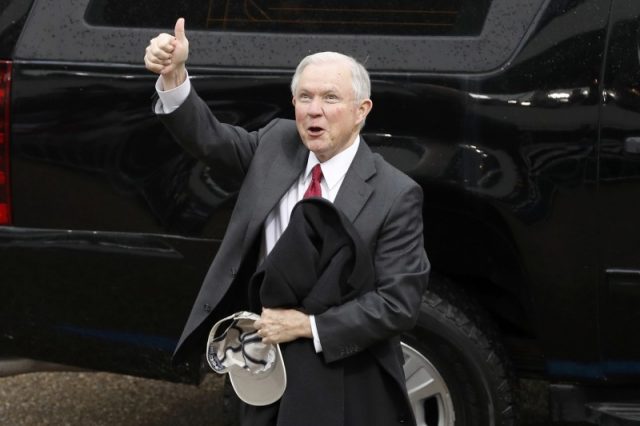 “Well, Sessions is confirmed, ya filthy animals. See you all in the next rung of hell,” Grace Parra tweeted. (RELATED: Celebrities Freak Out Over Trump’s Immigration Restriction)

Well, Sessions is confirmed, ya filthy animals. See you all in the next rung of hell. https://t.co/ZxVX4syHVJ

“[A] double whammy of total embarrassment #JeffSessions has been confirmed the day after @BetsyDeVos disgusting,” Sandra Bernhard tweeted.

a double whammy of total embarrassment #JeffSessions has been confirmed the day after @BetsyDeVos disgusting.

“If David Duke….DAVID!…DUKE!… thinks you’re right, then you are unequivocally wrong. The confirmation of @jeffsessions is beyond words,” Chris Evans tweeted.

If David Duke….DAVID!…DUKE!… thinks you’re right, then you are unequivocally wrong. The confirmation of @jeffsessions is beyond words. https://t.co/CuLUznwO6S

ICYMI: #JeffersonBeauregardSessionsIII was deemed too racist to be a federal judge but he was just confirmed to be US Attorney General.

“Rights are won only by those who make their voices heard.” – Harvey Milk.

Sessions is a revolting choice. The fight continues. #Resist

SHOUT OUT TO THE JUDICIAL BRANCH! YOU’RE ALL WE GOT!

In Black History Month, GOP confirms AG who was deemed ‘too racist’ to be a federal judge. That about sums up this entire shitshow.

Nice to see the little guy who works hard to fight equality & is too racist to be a federal judge catch a break. KKKongrats Mr. Sessions!

Congratulations, America. We have an oil man at State, a billionaire idiot at Education, and a racist as Attorney General. #SwampRats

I never thought I would have to question if the Attorney General Of The United States is a racist and opposes civil rights. Crazy sh*t y’all

Motherfucker was too racist for the 80s and there was a straight up blackface movie that came out in ’86. What a fucking nightmare. https://t.co/ZDog5XBJSl

One of the most blatant “fuck you’s” to the black community I have seen in a long time. For a while they tried to hide this shit. It’s back. https://t.co/NapsNEip7I

Jeff Sessions has been confirmed.

This is a national disgrace.