Before our eyes, we watched Saturday night as “SNL” turned CNN Jake Tapper‘s hostile relationship with President Trump‘s counselor Kellyanne Conway into a scene out of the 1987 film Fatal Attraction.

“Well, what am I supposed to do? You won’t answer my calls, you change your number. I mean, I’m not gonna be ignored, Dan!” Alex tells the man with whom she had a brief affair while Dan’s wife was out of town.

On “SNL,” Tapper’s character comes home to his apartment only to find Kellyanne’s character already there waiting for him. There is an open window and a long knife that “Kellyanne” holds to her throat and to his. She slithers up to him in a skimpy negligé, begging him for time on CNN while seemingly trying to seduce him. Come to find out, she doesn’t miss him, but rather, the attention he gives her on TV. 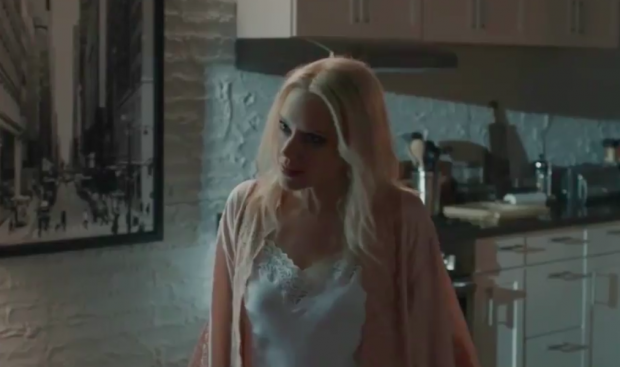 Those in the political media bubble in Washington and around the globe has never seen anything like this.

Some liberal journalists and even former aides to Hillary Clinton are not applauding SNL for its effort. Rather, they called out the show on Twitter for being over the line and sexist.

At one point in the sketch, “Kellyanne” falls out a window seemingly to her death.

“KELLYANNEEEEEE!!!!!” yells “Tapper” as she falls and crashes to the street.

You think surely she’s dead. Until she opens her eyes wide and eventually gets up and dusts herself off like nothing happened. I guess we can be thankful they didn’t try to perform the movie’s bloody bathtub scene.

“That was one weird ass Kellyanne skit on #SNL,” remarked CNN “New Day” host Chris Cuomo, who apologized this week for comparing the N-word to the newly coined phrase”fake news.”

The media (well, at least me) was waiting for Tapper’s reaction to the sketch with bated breath.

He wrote only, “Um” and linked to the scene.

When asked if the film gave him nightmares, Tapper wrote, “Didn’t see it until this morning.”

COME ON, JAKE. DON’T IGNORE US.

Tapper did reply to my Twitter question on his reaction, writing, “funny!” He was reacting to the entire SNL program, he explained. And not the scene with Conway.

So far, Trump has been uncharacteristically silent about it. So has Conway.

But not everyone thought the show or the specific sketch was funny.

“Was this sexist?” asked Kier Simmons, a London-based correspondent for NBC News.

Olivia Nuzzi, a liberal writer for New York Mag and formerly of The Daily Beast who has been highly critical of Trump and his aides, says yes. “Casting Kellyanne Conway as Glenn Close was a miscalculation on SNL’s part,” she warned. “Will be interpreted as unfair and mean to a wife and mother.”

Business Insider‘s liberal Josh Barro tried to shut down Nuzzi’s belief, saying, “I would note, SNL is not Trump’s political opponent, with the sole consideration being how the speech will land politically.”

The Atlantic‘s senior associate editor David Sims seemed to settle their disagreement. “Really interested in in the Beltway reaction to SNL, as it is a taxpayer funded program that gets voted on in federal elections,” he wrote sarcastically. “Though it is undeniably a sign of the insane times that the media is beginning to treat SNL like a political power on the White House level.”

Tapper nixed Conway from his program last weekend after VP Mike Pence blew off his show as the White House trotted him out on other political morning shows. During the week, Tapper raked Conway over the coals for a wide variety of lies during an unforgettable interview in which Tapper treated her every word as an incredible stretch of the truth if not a outright lie.

In Pence’s absence last weekend, the White House offered Conway up for Tapper’s program without telling her. She went on Twitter and said news of her being dissed by CNN was false, when, in fact, it was true.

Tapper got the cold shoulder this weekend when he asked for a White House official to appear on his Sunday show.

“We invited the WH to offer a guest for @CNNSotu to discuss President Trump’s agenda and plans,” he wrote on Twitter Sunday morning. “They did not respond to our request.”

When a follower accused him of being “very biased” against Trump, Tapper sternly replied, “Example of me doing that please.”

“So like, people signed off on that @KellyannePolls sketch presumably?” Lehrich wrote. “That was neither funny nor ok.”

Rob Flaherty, who worked rapid response for Clinton, agreed: “Yeah it was literally just like ‘hah lets do the same jokes as last week but slightly worse.'”

Charles Pierce, a sharply liberal political writer for Esquire, was among the few who seemed to think the whole thing was just fine under the circumstances.

“I suspect cries of sexism from the blood from her wherever/pussygrabbing administration will lack a certain cred,” he wrote.

But Shannon Proudfoot, a political writer in Ottawa who writes for Maclean‘s, wrote, “The Kellyanne Conway sketch was bad. Too much, too vicious, too weird in the wrong way without getting at anything important. And the last sin here is the worst. You can get away with writing edgy stuff (or if you believe you should) if you have a point worth making.”

Ben Shapiro, a Trump hater, an Orthodox Jew and a right-leaning journalist who runs The Daily Wire, also didn’t like it.

Philippe Reines, who played Trump during Clinton’s election debate prep, had an entirely different reaction to the episode that included the violent, sexual sketch: amusement.

“Imagine the struggle for the remote happening now at Mar-a-Lago as Japan’s PM tries to change channel from SNL to North Korea crisis on CNN,” he wrote.

The President spent the weekend at Mar-A-Lago, his weekend White House — or The Atlantic‘s McKay Coppins favorite vacation spot — socializing with Japan’s Prime Minister Shinzo Abe and his wife.

It’s hard to believe they settled in for a relaxing evening of watching “SNL.”

But with this White House, it’s a good bet Trump was watching right along with the rest of us.