First daughter Ivanka Trump has had a rough week.

Not starving on the street rough. Just rough in the sense of being outed for using an alias when exercising at a Washington gym and criticized by the gym’s perfectly toned owner for showing up there and daring to work out in a highly overpriced class that Michelle Obama enjoys sans drama. And now — incredulously — the gym’s owner, Anne Mahlum, wants a meeting with her.

Ivanka also had Nordstrom’s drop her merchandise line. President Trump quickly rushed to her defense and damned the department store. Some deemed that unprofessional and a crossing of boundaries that was supposed to be avoided in his new presidential role. 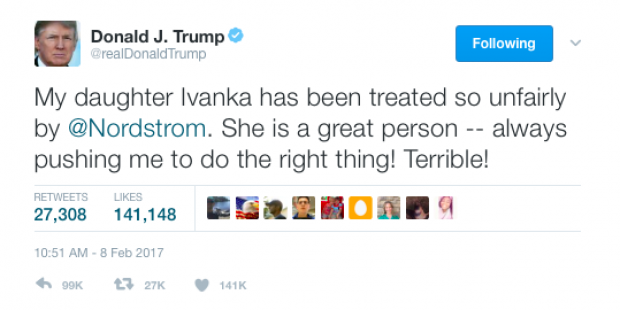 Trump’s counselor Kellyanne Conway brashly went on Fox News and said she was going shopping for Ivanka branded stuff. And you should, too. Which didn’t go over too well in Washington with some saying Conway had committed an ethics violation by using the office of the presidency to boost Ivanka’s business.

By dinnertime on Saturday, Trump couldn’t take it anymore. He grabbed the press by the throat for all of it. 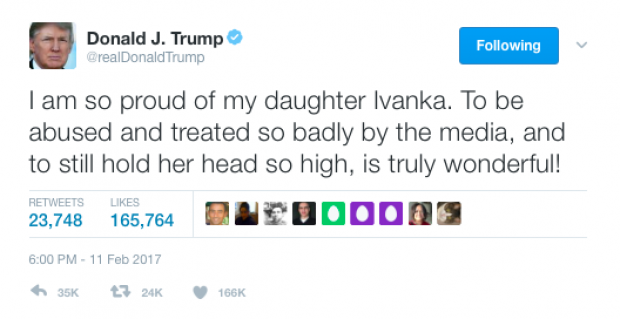 Naturally it was the media’s fault that these events transpired.

Washington reporters are somehow to blame that “SNL” turned Ivanka’s Nordstrom’s ordeal into a Sean Spicer sketch in which he donned women’s heels and turned a White House presser into a QVC commercial.

Reacting to Trump’s slight on the media was not met with sympathy.

“I agree, after you’ve amused and demeaned the entire judicial system, my heart goes out to your daughter,” wrote Alex Zalben, the obviously liberal managing editor of TV Guide, in response to Trump’s tweet.”Yes, between the thousands of hate crimes perpetuated since your election, and your daughter, let’s all feel bad for her. Certainly, between the thousands attacked by your Muslim Ban, and your rich socialite daughter, she’s the one suffering.”