After The Daily Caller‘s White House correspondent Kaitlan Collins got called on in Monday’s bilateral presser with President Trump and Canadian Prime Minister Justin Trudeau, some members of the White House press corps went berserk, insisting that The Daily Caller went easy on him.

MSNBC’s Brian Williams, who infamously had to take some time away from journalism after he made up stories about being on a helicopter in Iraq that sustained a Chinook attack and other acts of embellishment, was quickly on The Daily Caller reporter’s ass right out of the gate.

What was important about today’s press conference, he said, was not what was said, but what was not said.

MSNBC’s Katy Tur agreed, saying Collins had asked an easy question. What Tur didn’t report was that Collins’ question caused Trudeau to squirm his way out of the second part of her question. She asked what he thought about Trump’s immigration ban. He said Canadians wouldn’t want him come to the U.S. and lecture the President on how to govern.

Other White House reporters were irate. They wanted to ask Trump about his National Security Adviser, General Michael Flynn, who got caught lying about whether he discussed sanctions with a Russian ambassador. He ultimately admitted that he discussed the touchy subject and apologized.

At the time of the presser, the White House had not commented on the matter. However Trump’s counselor Kellyanne Conway appeared on MSNBC Monday afternoon to say that the President still has 100 percent confidence in Flynn.

None of the reporters called on at Monday’s press conference asked about Flynn, but somehow some White House reporters are insisting that The Daily Caller purposefully went easy on Trump even after the publication published stories that were critical of him and his aides during the election. WJLA’s Scott Thuman, the only other U.S. reporter who was granted a question, also didn’t ask about Flynn. A female AP reporter approached Collins after the presser and asked if the White House told her not to ask about Flynn. The answer: No.

Since reporters are displaying their obvious jealousy over Trump and White House Press Secretary Sean Spicer dumping the typical protocol of calling on the front row and journalists who have always gotten questions, The Daily Caller is proposing that Trump issue a White House Executive Order to deport certain reporters.

Yahoo! News‘s Hunter Walker, who was dubbed “a friendly” to Hillary Clinton‘s camp during the election. A quick thank you to Wikileaks for letting us all in on that.

Collins never called Walker a liar, but he persisted with his accusations.

CNN’s Wolf Blitzer, who led a panel that involved a lot of bitching about The Daily Caller reporter’s question. Blitzer’s production staff was implicated in the Wikileaks emails for requesting questions from the DNC for Republican candidates.

NYT’s Glenn Thrush, who also whined about The Daily Caller‘s question despite the fact that he routinely gets to appear in and question Spicer in SNL sketches. He might not enjoy how fat they make him, but at least writers gave him a hat over the weekend. Thrush was also caught in the Wikileaks emails, referring to himself as a Clinton hack. To be honest, Thrush is a nice person in real life. Still…deport him immediately!

MNSBC’s Katy Tur, for going after Collins despite the fact that none of other reporters asked what she wanted. Talk about insufferable, she also dated GQ correspondent Keith Olbermann.

MSNBC’s Brian Williams, who deserves an obvious place on the deportation list.

Daniel Gross, executive editor of some non-entity called Strategy +Business, and a a liberal columnist for Slate and The Daily Beast.

Tommy Christopher, a liberal writer at Shareblue who refuses to eat watermelon as a way of standing in solidarity with African Americans. 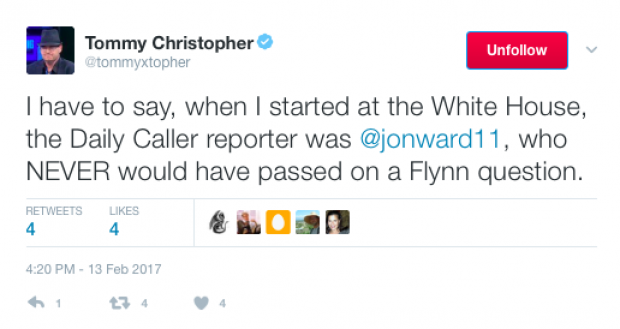 If an eighth reporter is needed for deportation, CNN’s Brian Stelter is available.