MSNBC’s Joe Scarborough and Mika Brzezinski put themselves in charge of President Trump‘s hiring decisions over the weekend and Monday on “Morning Joe.”

The target of their angst over the last few days is Stephen Miller, President Trump‘s senior White House adviser.

They want him gone.

The TV couple began their campaign against the aide over the weekend on Twitter.

They finished him off on their Monday program, playing clips of Miller from the Sunday morning political talk show circuit and reacting like the 31-year-old adviser is the worst thing mankind has ever encountered. To be fair, yes, Miller was arrogant and loathsome on the Sunday shows.

But is it Joe and Mika’s job to try and get him shitcanned?

On Sunday, Mika turned into a political activist.

Joe totally backed her up. 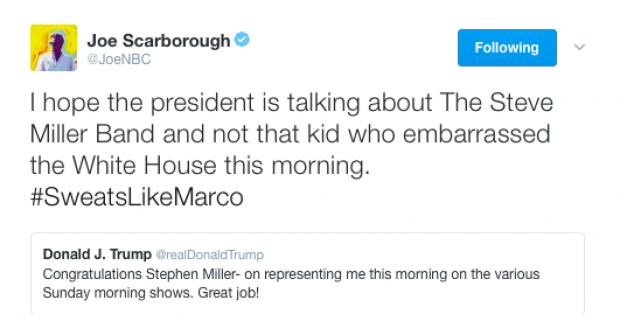 Mr. and Mrs. Morning Joe have a relationship with Trump that ebbs and flows. Sometimes it’s cozy. They’ve been known to meet with him and his aides at Trump Tower. Other times the relationship is nonexistent. At one point during the election, there was no contact at all, which changed when Scarborough’s son fell down a flight of stairs and wound up in the hospital.

Joe and Mika, who were spotted at Trump’s Mar-a-Lago on New Year’s Eve — allegedly for the chance to interview Trump — like to think they are highly influential over what the President says and does. They’ve also spent a lot of air time congratulating themselves for predicting Trump’s win.

Scarborough stressed that he once called Trump’s campaign “racist, xenophobic and disqualifying.”