Militant, black-mask-wearing, capitalism-hating, anarchy-loving leftists staged the riotous demonstrations on the campus of the University of California, Berkeley earlier this month which forced the cancellation of a speech by Milo Yiannopoulos.

A report by Los Angeles Times reporter Paige St. John describes the tactics and beliefs of the violent demonstrators.

In the process, the LA Times story shows that Robert Reich, the labor secretary under Bill Clinton and a current Berkeley professor, was utterly wrong to suggest that right-wing groups staged the Feb. 1 violence on the UC Berkeley campus in response to the speech by Yiannopoulos, an openly gay Breitbart News editor and Donald Trump supporter.

The black-clad demonstrators — identified as a loosely-assembled group called black bloc — destroyed barricades, threw Molotov cocktails at police officers, smashed windows at a Starbucks and an Amazon store, started a fire and assaulted a Trump supporter with pepper spray on the Cal campus.

Black bloc demonstrators accounted for around 100 of the several hundred protesters at Cal, but they essentially took over the protest. 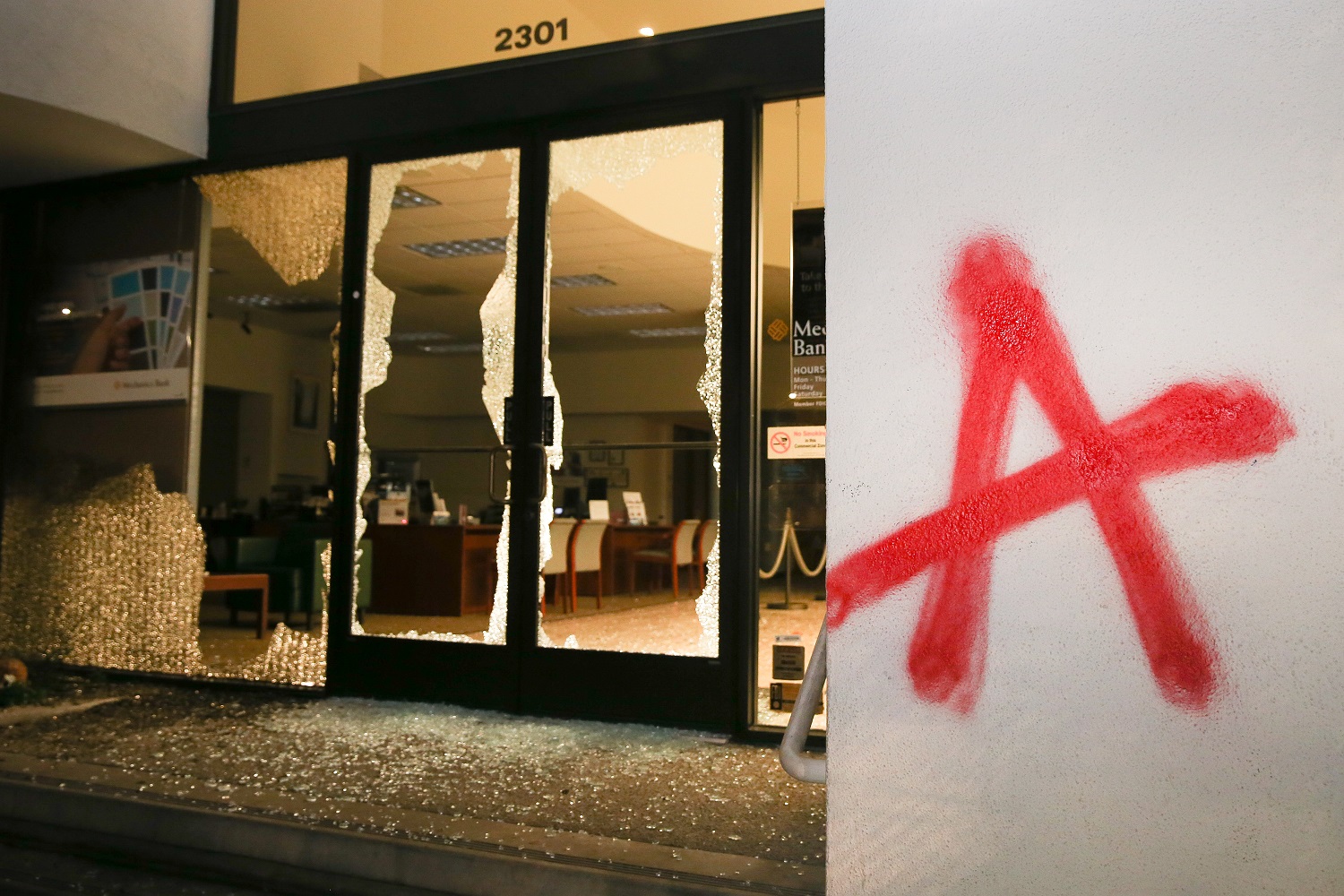 “I subscribe to self-defense in the very same sense that the Black Panther Party does and that Malcolm X does,” an unidentified black bloc agitator told the Times.

“I go through the Bay Area and there are people sleeping in the doorways of million-dollar condos that are empty,” the demonstrator said. “Is that not violent?”

“That is the most cruel and violent thing I think I have ever seen.”

The attack on Starbucks was calculated.

“Starbucks is a symbol of global capitalization,” the black bloc activist told the Times.

“I was there for part of last night, and I know what I saw. Those people were not Berkeley students. They were outside agitators,” Reich said during a panel discussion with CNN’s Don Lemon. (RELATED: Famous Berkeley Prof Suggests That Violent Protesters At Milo Event Were Right-Wing Plants)

“There are rumors that they were right-wingers, they were part of a group that were organized and ready to create the tumult and danger you saw that forced the police to cancel the event,” Reich also said. 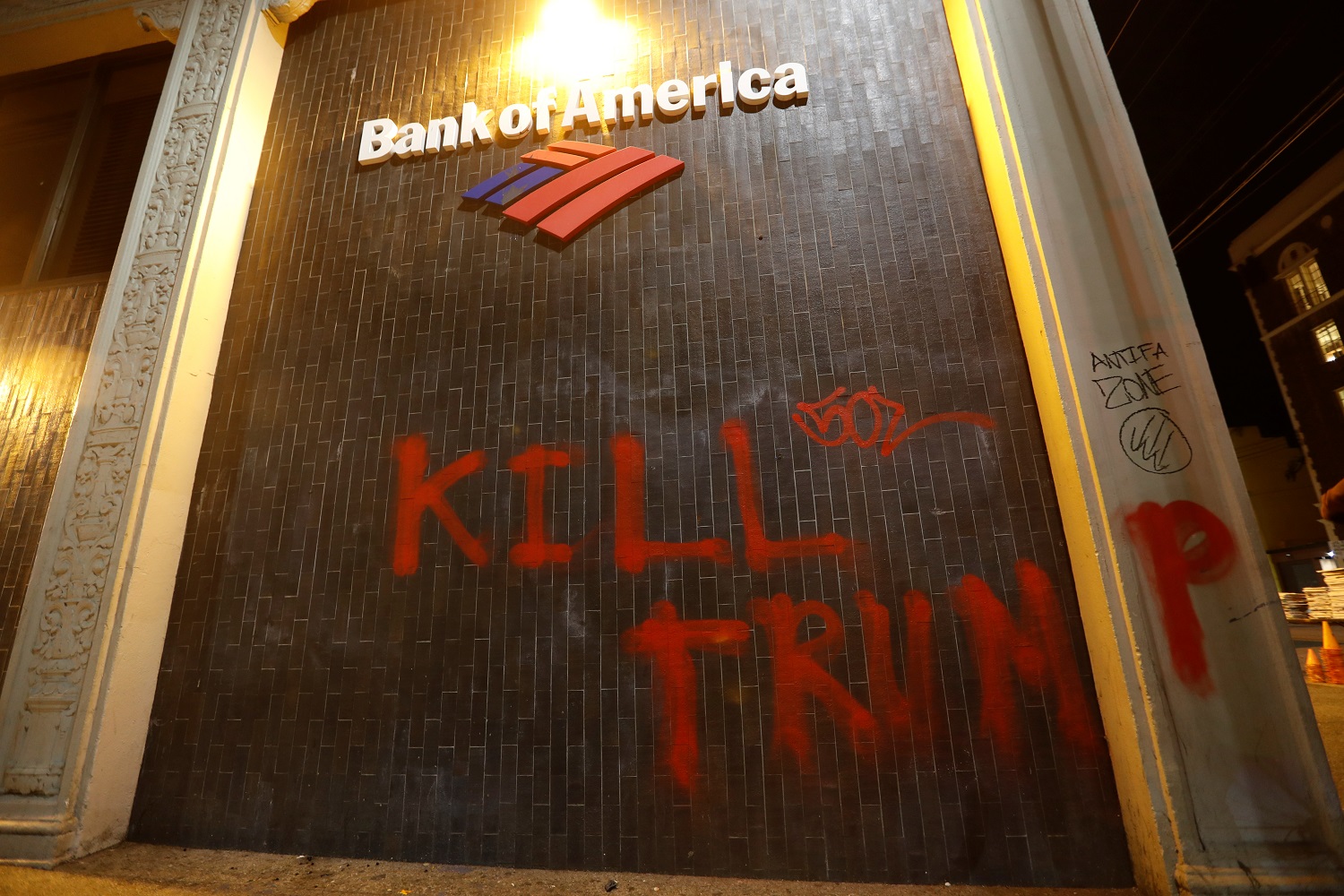 Black bloc demonstrators are national in scope. In addition to the violence on the Cal Berkeley campus, black bloc demonstrators have protested violently in Oakland — their epicenter. They say they are also responsible for breaking windows, setting a limousine on fire and defacing banks on the weekend of Donald Trump’s inauguration. And they fought — and got stabbed by — some neo-Nazis in Sacramento in June.

The throng of police at the UC Berkeley riot stayed mostly inside the Student Union. The police theory at the time was that intervention to prevent the violent protest would foment more violence by black bloc demonstrators and perhaps other elements on the scene.

Police were well aware that a supporter of Yiannopoulos had shot and gravely injured a radical protester at a previous Yiannopoulos event on the campus of the University of Washington in Seattle. (RELATED: Gunman Who Seriously Injured Man Outside Milo Yiannopoulos Event Is Strong Trump Supporter)

The plan by police to let the demonstration run out of steam was a failure.

“They were going to allow it to happen until they determined that it was too dangerous for it to actually happen,” the black bloc member who spoke to the LA Times said. “So what other choice did we have?”

The Daily Californian, the main student newspaper at Cal Berkeley, published an op-ed inviting students to show up to protest Yiannopoulos one day before the event and the resulting violent demonstrators on campus. (RELATED: The Cal Berkeley Student Newspaper PROMOTED Protest-Turned-Riot The Day Before Milo Event)

After the riot, The Daily Californian published a series of columns that praised the riot that shut down Yiannopoulos. Headlined as “Violence as Self-Defense,” the series was intended to give a voice to those who thought the multiple assaults and serious property damage committed in the name of cancelling Milo were 100 percent right. A few of the violence-supporting essayists admitted to participating in the riots and refuted claims they were staged by right-wingers. (RELATED: Berkeley Student Paper Publishes Columns PRAISING Anti-Milo Riot)