WASHINGTON — President Trump went off script during a surprise press conference at the White House on Thursday, turning what was supposed to be a mundane announcement of his new labor secretary nominee into a circus. 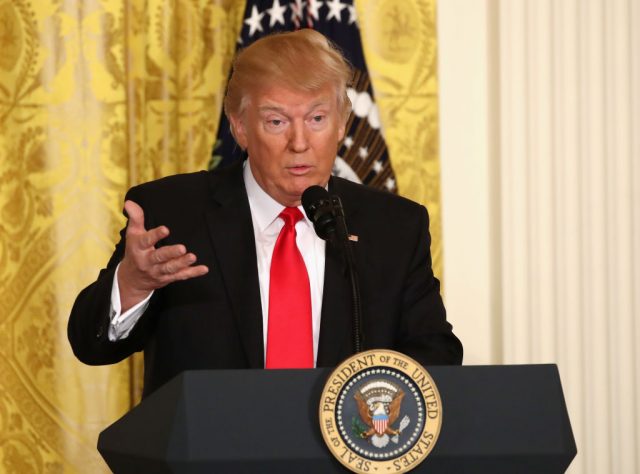 The president listed his accomplishments in office thus far and touched on a number of subjects — his approval rating, radical Islamic terrorism and “the dishonest media” — during a 20-minute opening statement.

“Many reporters will not tell you the truth,” Trump said from the East Room of the White House. “They do not treat the people of our country with the respect they deserve. Unfortunately much of the media in D.C., New York and Los Angeles speak, not to the people, but for the special interests and those profiting. The press has become so dishonest that if we don’t talk about it, we are doing a tremendous disservice to the American people. The level of dishonesty is out of control.”

“I ran for president to present the citizens of our country,” he continued.

“I am here to change the broken system so it serves their families and their communities well. I am talking — and really talking on this very entrenched power structure, and what we’re doing is we’re talking about the power structure; we’re talking about its entrenchment. As a result, the media is going through what they have to go through too often times distort — not all the time — and some of the media is fantastic, I have to say — they’re honest and fantastic.”

Trump said what is published in the news is not representative of what is happening in the White House.

“I turn on the TV, open the newspapers and I see stories of chaos — chaos,” he said. “Yet it is the exact opposite. This administration is running like a fine-tuned machine, despite the fact that I can’t get my Cabinet approved.” 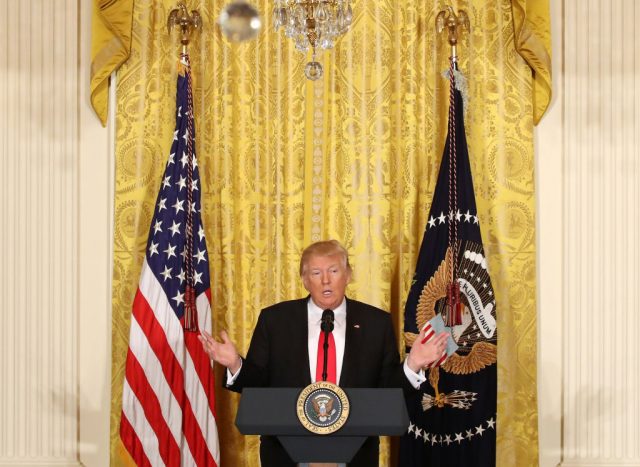 Then the president moved on to ISIS, which he said has “spread like cancer.”

“That’s another mess I inherited,” he said.

“And we have imposed new sanctions on the nation of Iran, whose totally taken advantage of our previous administration, and they’re the world’s top sponsor of terrorism, and we’re not going to stop until that problem is properly solved. And it’s not properly solved now, it’s one of the worst agreements I’ve ever seen drawn by anybody. I’ve ordered plan to begin building for the massive rebuilding of the United States military. Had great support from the Senate, I’ve had great from Congress, generally.”

After that, Trump returned to his Cabinet nominations, or lack thereof.

“We have a wonderful group of people that’s working very hard, that’s being very much misrepresented about and we can’t let that happen,” Trump said.

“So, if the Democrats who have — all you have to do is look at where they are right now. The only thing they can do is delay because they screwed things up royally, believe me. Let me list to you some of the things that we’ve done in just a short period of time. I just got here. And I got here with no cabinet. Again, each of these actions is a promise I made to the American people.” 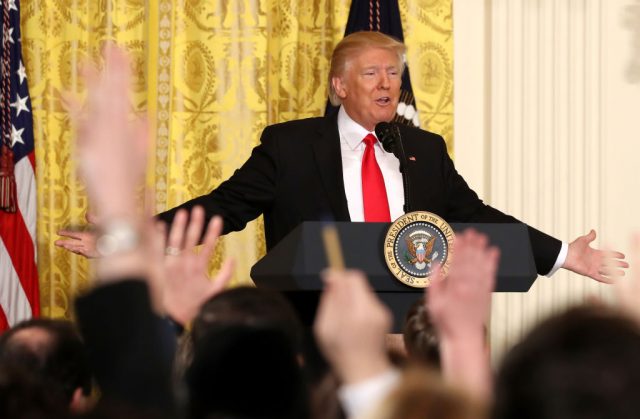 Multiple reporters asked Trump about his, or his campaign’s, connections with Russia, which he fervently denied.

“I can tell you, speaking for myself, I own nothing in Russia. I have no loans in Russia. I don’t have any deals in Russia. President Putin called me up very nicely to congratulate me on the win of the election.”