To recap one of the left’s favorite arguments over the past month: It’s okay to punch “Nazis,” because Indiana Jones did it. Never mind that you can’t shoot Muslims in the street just because Indiana Jones did it. The point is that if you tweet a picture of an actor doing something in a movie, that means it’s okay to do the same thing in real life to people you don’t like.

And what constitutes a “Nazi” in 2017 America? Pretty much anybody. WRAL, Raleigh:

Here’s a look at the flier, courtesy of Campus Reform: 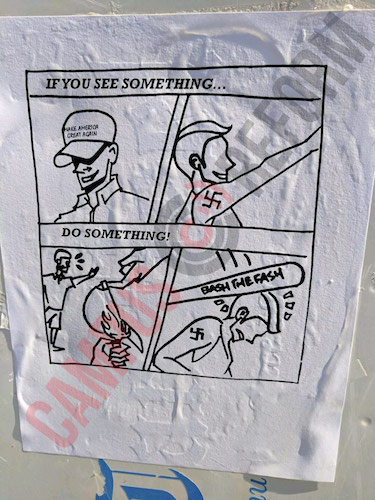 It depicts a guy getting his Make America Great Again hat burned with a lighter, and a guy with a swastika tattoo getting hit in the head. Because a MAGA hat and a swastika are the same thing.

Openly calling for violence against supporters of a freely elected president, because they’re just like those other people nobody likes. It sure is weird how much “anti-fascism” resembles plain old fascism.

How about if somebody’s wearing a hat that just looks like a MAGA hat? That’s what happened to the young woman at Berkeley who was pepper-sprayed by one of those black bloc cowards:

Her hat said Make Bitcoin Great Again. That didn’t matter to the fascist who attacked her. He just saw something that made him angry, and it gave him license to hurt other people.

If you condone this, you’re a bad person. If you keep condoning this, you’re going to convince even NeverTrumpers like me to vote for him in 2020. I don’t support political violence, and I reject anybody who does. That’s because I’m not a fascist.