The group that accused Milo Yiannopoulos of defending pedophilia is funded by an anti-Trump, pro-McMullin PAC that once tweeted “we hate white children.”

The Reagan Battalion Facebook page, which alleged Monday that Yiannopoulos supported pedophilia, has a link under Contact Info that directs visitors to a web domain titled, “stopdonaldtrumppac.com.” The domain no longer resolves, but a screenshot of the site can be found here.

The Stop Trump PAC also has a Twitter account from which it once tweeted the phrase “we hate white children,” which has since been deleted: 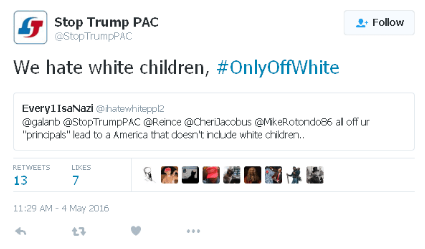 Evan McMullin retweeted a tweet bragging about his involvement in taking down Yiannopoulos, calling Milo a “Nazi punk” but not directly confirming that he was involved in any supposed hit job.

In a 4Chan post made the evening of Sunday, a user tells others that “FYI [for your information] the MSM [mainstream media] has a huge fucking media onslaught that is set to go live Monday to scorch earth [sic] Milo and destroy him via the pedophile label.”

“I’m part of a mailing list (not giving my real name or the name of the list for the sake of protecting my ass from retaliation) but they have been sitting on the story for a while, because they thought Milo was small fries and wanted to wait until he got big enough a thread to go nuclear on.”

Editor’s Note: This reporter worked with Milo as an intern in 2015 and contributed to Breitbart from 2015 to 2016.