CNN’s Chris Cuomo deserves credit for going where no male broadcaster has ever gone. He replied to a Twitter follower who raised the issue of a 12-year-old girl seeing a grown man’s penis in a women’s restroom.

But…he probably shouldn’t have gone there.

Not if he doesn’t want to devote his entire day to explaining what the hell he meant by saying the following: 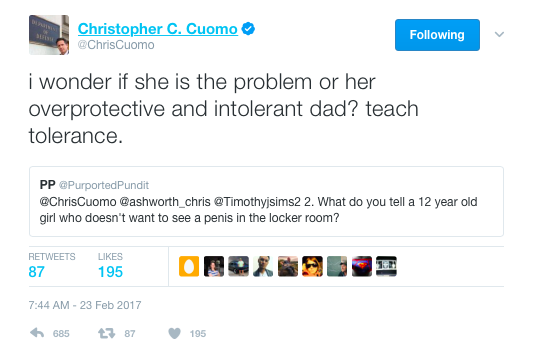 Hello and welcome to bathroom hell. The conversation with Cuomo arose after President Trump reversed then-President Obama‘s federal dictum concerning transgender protections and bathrooms. Trump’s reversal pushes the decision back to the states.

Cuomo’s tweet pinged at 7:44 a.m. It’s nearly 5 p.m. and the fireball of a conversation between him and his online attackers is still raging.

Except maybe that isn’t quite what Cuomo meant.

In my mind, a possible translation is this: The CNN host of “New Day” thinks the 12-year-old girl’s father should teach her tolerance when using the restroom. In other words: If she sees a penis, she shouldn’t worry about it or pay attention to it.

Cuomo replied, “How do you envision this happening? A girl’s room with no stalls or some person just walking around bathroom naked?”

Cuomo fired back several times at Dice. In one remark, he seethed, “That’s a lie and you are wasting time. I was clearly saying this isn’t about the girls it is about parents judgments now prove the risk.”

This is when the discussion took a sharp turn into Crazyland.

Dave Herculeon (not anyone you should know) said: “So because of liberal logic, parents need to show their little girls an adult male penis at so LGBT adult feels comfortable?”

Cuomo: “Are you thinking?”

Herculeon: “All the time Chris. People are allowed to think different on this. Don’t forget, this wasn’t an issue for MSM until Obama. Why?”

“In other news, @ChrisCuomo seems to be a pervert or otherwise lack basic decency,” he wrote on Twitter.

At 4 p.m., Cuomo was still explaining himself: “The context is clear to me,” he tweeted.”The parent is saying if his daughter is offended and I am saying that he is the issue not her.”

Moral of the story: When you have to resort to all caps and use words like “dead clear” something has gone terribly wrong.

The Mirror‘s take: Cuomo isn’t saying a 12-year-old girl should be to blame for seeing a penis in a women’s restroom and getting afraid. He’s suggesting that her father should teach her that it’s okay if she sees one in a public facility and not get afraid. He’s firmly on the side of the LGBTQ community. Except now his detractors think he’s a pervert. My prediction is that this online discussion will not cease anytime soon.