President Trump railed against “the dishonest people” in media and promised to fulfill his campaign pledges on Friday, delivering a message meant to energize conservative voters.

The president repeated his promise to put American citizens first in a campaign-style speech at the Conservative Political Action Conference outside of Washington. 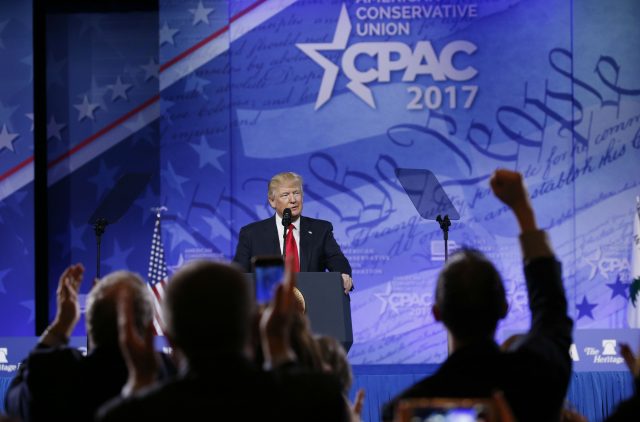 “Sit down, everybody,” Trump said as he took the stage. “You know the dishonest media, they’ll say, ‘He didn’t get a standing ovation.’ They are the worst.”

“You know my first major speech was at CPAC, probably five or six years ago. My first political speech. I wanted to come last year but I thought at that time I was too controversial.”

“Never underestimate the people,” he continued. “Never. I don’t think it will ever happen again.”

“I want you all to know that we are fighting the fake news. It’s fake, phony, fake. A few days ago I called the fake news the enemy of the people, and they are. Because they have no sources. They just make it up when there are none. They make up sources. They’re very dishonest people. They did not explain that I called the fake news the enemy of the people. They dropped off the word fake. That’s the way they are. I’m not against the media. I’m not against the press. I don’t mind bad stories, if I deserve them. I love good stories. I don’t get too many of them. I am only against the fake news media or press. I’m agains the people that make up stories and make up sources. They shouldn’t be allowed to use sources unless they use somebody’s name. Let their name be put out there. There are some great reporters out there. You have no idea how bad it is. You have a lot of them…the Clinton News Network is one.”

Donald Trump says "We are fighting the fake news" as he calls media the "enemy of the people" #CPAC pic.twitter.com/6GFrKs0xMj

Trump said networks like CNN, ABC and CBS use fake polls to discourage voters from voting and to promote their own agenda.

“It creates a whole false deal, folks,” he said. “And we have to fight it. They get upset when we expose their false stories. They say we can’t criticize their coverage because of the First Amendment. Nobody loves it [the First Amendment] better than me.”

“Our victory was a win for everyone who believes in conservative values,” Trump said, returning to his speech. “Our win was a victory for the American worker. We are all part of a historic movement, the likes of which the world has never seen before. There’s never been anything like this. Maybe Bernie, but he petered out. But we got a lot of Bernie support, so actually I like Bernie. OK? I like Bernie.”

“I’m here today to tell you what the future of this movement means for America and the future of the party. The core conviction of our movement is that we are a nation that put, and will put, its own citizens first.”

Trump said the planning and construction of the border wall is “way ahead of schedule.”

The president then repeated his statement that he inherited a mess from Barack Obama, and railed against his signature healthcare law.

“We inherited a national debt that has doubled in eight years,” he said. “Think of it. We inherited a national policy that was a disaster. When was the last time we won? We’re going to win big. We are taking a firm, bold and decisive measure to turn things around. The era of empty talk is over. Now is the time for action.” 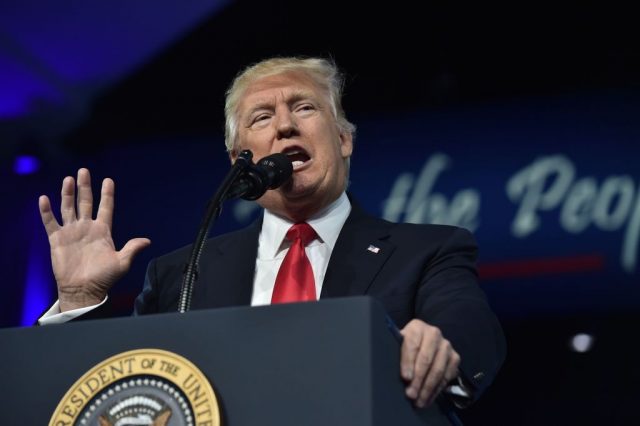 Trump then moved on to immigration, law enforcement and the Trans-Pacific Partnership.

“And by the way, I want regulation. I want to protect our environment. I want regulations for safety. I want all of the regulations that we need and I want them to be so strong and so tough, but we don’ need 75 percent of the repetitive, horrible regulations that hurt companies, hurt jobs and make us noncompetitive overseas with other companies from other countries. We are going to have regulation, be really strong and really good and going to protect our environment and going to prove the safety of our people and workers, OK?”

He said he was building the military “bigger and better and stronger” than before.

“It will be one of the greatest military buildups in American history. No one will dare question, as they have been because we are very depleted, our military might again. We believe in peace through strength and that’s what we will have.”

“We are going to keep radical Islamic terrorists the hell out of our country. We will not be deterred from this course. In a matter of days, we will be taking brand new action to protect our people and keep America safe.”