Media Matters is known for its suffocating political correctness.

Except on Sunday night, Oliver Willis, a researcher for the the left-leaning DNC propaganda website, was wondering what the hell was going on with actress Halle Berry‘s gigantic, luscious curls at the Oscars.

He was quickly shot down by Oliver Griswold, a self-described branding guy in Portland, Maine.

The Daily Beast’s senior editor and writer Tim Teeman defended the actor’s do. “On the #Oscars red carpet, Halle Berry’s successful campaign to bring big hair back, back, back,” he wrote.

However, someone named “Pussy Wedges” found it offensive, as some viewers felt sorry for anyone sitting behind the star. “Halle Berry’s hair is being real disrespectful at this show,” he wrote.

Sports Illustrated ran a Separated at Birth of Berry with former Warrior’s teammate Anderson Varejao. SI later deleted that tweet, according to the Miami Herald, which captured a screenshot.

HLN’s Carol Costello also seemed to have a problem with Berry’s hairstyle. She wrote cryptically, “Halle Berry’s hair. I want to talk about it. But I won’t. #Oscars2017” 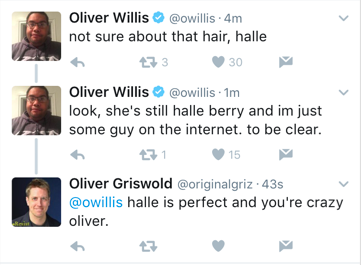 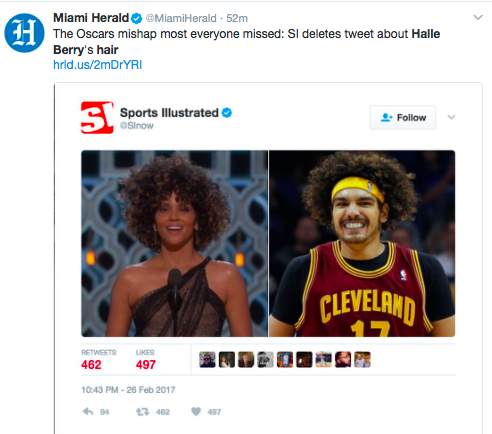 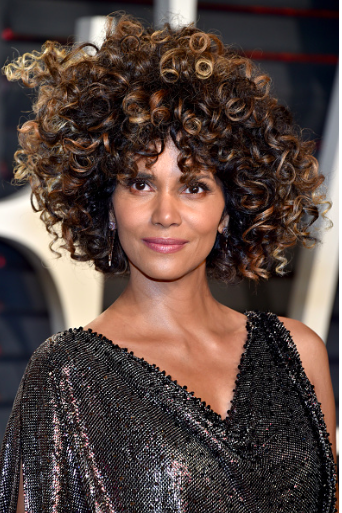 Ultimately, The Mirror sides with Berry.