Is she hinting that the joint is too expensive?

And would anyone expect a Trump hotel to not serve pricey cuisine?

The prices certainly are not ideal on a regular journalist’s salary but then again, Van Susteren has her own plane and a yacht. Last May she sold her Annapolis home for 1.05 million — nearly a million less than the asking price. She also drives a Tesla (price tag: 79K to 134K). She earned millions at FNC and TV insiders suspect she earns at least six figures at MSNBC.

She’s not all about the finer things in life. In 2012, she and her husband, attorney John Coale, opened an orphanage academy in Haiti. And they formerly owned part of a 144-seat seaside restaurant in Mattituck, New York.

The absolute cheapest thing on the Trump restaurant menu will set you back $10: the truffled fried egg meant to go on top of a steak. The next tier is$12. These are side dishes — and who would go to Trump’s hotel and order a steak topper or a side dish of french fries or creamed spinach and nothing else?  The next tier is $16. This includes the Chopped vegetable salad, “Clothesline” candied bacon, lobster bisque, and pastrami salmon (wtf, sounds disgusting).

But let’s get to the reactions on Van Susteren’s tweet.

Fair and balanced Van Susteren managed to piss off everyone with this one. 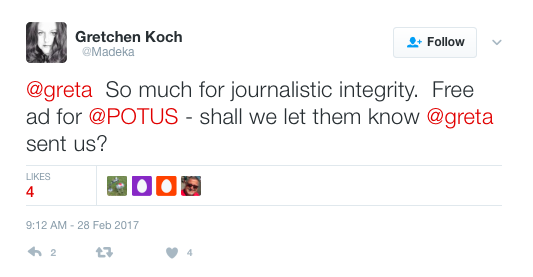