For years now, the name that is most associated with a Washington Post political blog called “The Fix” has been Chris Cillizza. Cillizza founded the blog. But he hasn’t run the thing in years.

And now, WaPo is once again looking for someone to do the heavy lifting while he oversees things.

In March of 2015, WaPo reporter Aaron Blake took over as managing editor with Cillizza watching over the operation. But last July, Blake returned to writing and Rebecca Sinderbrand, formerly with Politico, became managing editor of “The Fix.”

Eight months later, the blog is in search of a new editor.

WaPo placed an ad for the position on its tumblr. 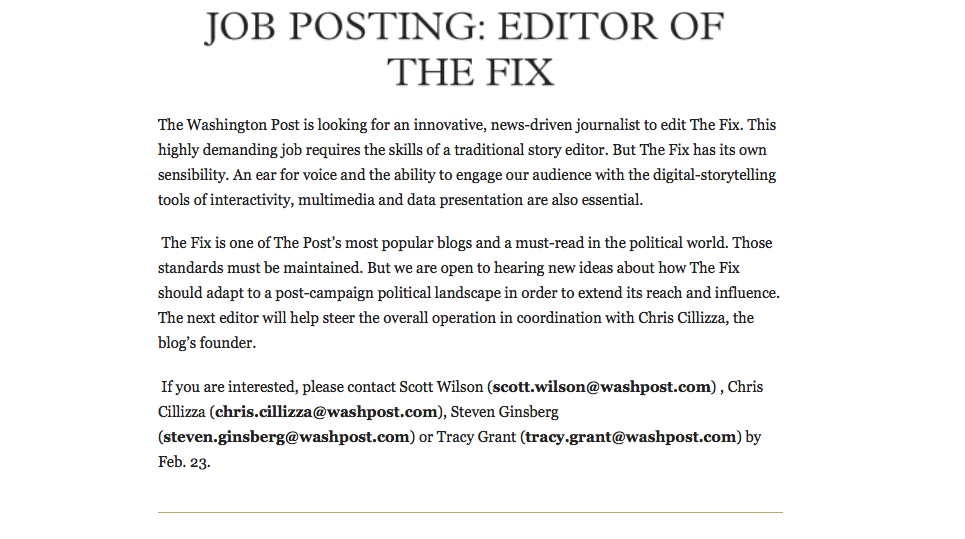 This may be a terribly obvious question, but does “The Fix” need fixing? The ad says the new editor will work “help steer the overall operation in coordination with” Cillizza. But notice that they want someone with “new ideas” who can get the blog greater influence.

[RELATED: WaPo’s Chris Cillizza Whines About Something Bill Clinton Made A Career Of Doing]

[RELATED: Seriously, How Many Mea Culpas Can We Have About How Wrong Chris Cillizza Is?]

[RELATED: Who Had The Worst Week In Washington? WaPo’s Chris Cillizza]

Embarrassingly, his book, The Gospel According to The Fix, circa 2012, is billed as a way for a complete dummy to understand Twitter: “The onset of social media has only made that barrier higher, as insiders tweet furiously to one another in a language most of us can’t even understand,” a description on Amazon reads.

Seriously? Who can’t understand the dumb shit of Twitter?

A media insider insists that Cillizza’s position at The Washington Post is solid.

As an MSNBC political analyst, Cillizza is a staple on Andrea Mitchell‘s program. Whenever he’s introduced on any cable news program, he has this bizarre tic of closing his eyes briefly when he’s introduced. As if being a pundit and offering his views is somehow spiritual.

“Chris is very much still here, as ever,” a source said of his standing at WaPo.

The Mirror reached out to Cillizza to ask him a few questions:

Blake and Sinderbrand did not comment on the matter.

Cillizza did not return an email request for comment.

WaPo publicist Kris Coratti told The Mirror, “Chris is the founder of The Fix blog– there has been an editor for years, and this is just an announcement replacing the person who had that position.”

UPDATE: The Mirror has learned that the previous editors did not leave the blog because they had negative experiences, but rather for new projects and a desire to write. Sinderbrand, for instance, is leaving town to work on a long-planned book project. Sources assure me that The Fix blog is “great,” and that the people who write for it are “aces.” A source added, “People should definitely apply! It’s obviously a time-intensive job, but worth it.”