The White House issued a new executive order on immigration Monday that temporarily bars the citizens of Sudan, Syria, Iran, Libya, Somalia and Yemen from entering the United States for 90 days. It has two major differences from the first version of the executive order: it does not include Iraq and removes the blanket ban on Syrian refugees. 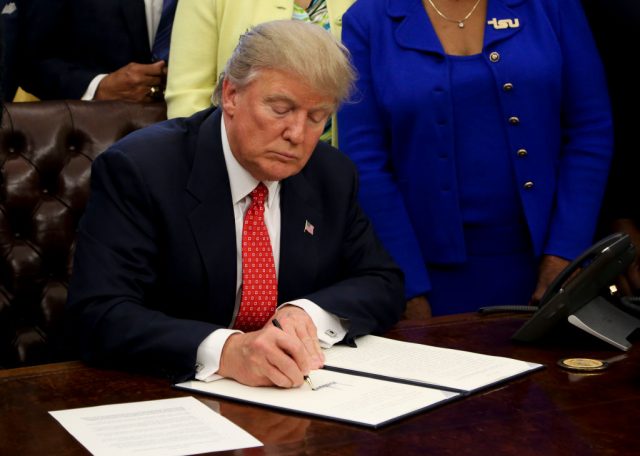 Citizens with visas from the six countries listed in the order will not be affected by it and no visas will be revoked solely because of the order. Nationals who did not have a valid visa by Jan. 27 at 5 p.m. “are not eligible to enter the United States while the temporary suspension remains in effect.”

Iraq was excluded from the new order because the United States received “firm commitments” from the Iraqi government that U.S. will be able to vet and screen Iraq nationals as seen fit, a senior administration official said during a call Monday.

During the first 20 days of the ban, DHS will conduct a review of the security and identity information that each country included in the ban provides to the United States in the visa process. Those countries will then have 50 days to comply with whatever suggestions the U.S. makes to “update or improve the quality of the information they provide.”

The order suspends the refugee admissions program for 120 days while the Department of Homeland Security reviews its screening procedures. Once the program resumes, only 50,000 refugees will be allowed in during the fiscal year 2017 — down from the 110,000 accepted last year by Barack Obama’s administration.

It also removes the language that gave priority to Christian refugees applying from countries that are predominantly Muslim.

A Department of Justice official said they expect the new order to withstand the legal scrutiny that the first one did not because it cites specific examples where citizens from these countries were convicted of terrorism.

The order will take effect on March 16.

Though the press was not allowed in the Oval Office for the signing of the executive order, the White House did confirm to a pool reporter that the order was signed.