WASHINGTON — Sean Spicer held the daily briefing, on camera, at the White House Tuesday. Health and Human Services Secretary Dr. Tom Price took the podium at the beginning of the briefing to answer questions about the new healthcare bill proposed Monday night.

Here are the highlights. 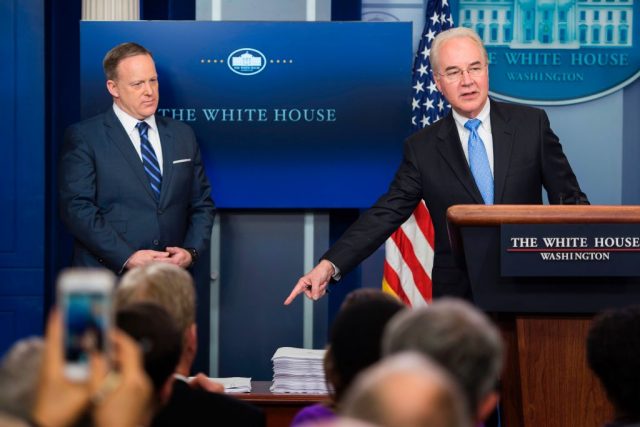 On the Obamacare replacement plan

Tom Price said there are three phases to the new healthcare plan. The first phase was the replacement bill proposed Monday night, the second phase is regulatory modifications added later on, and the third phase is additional legislation that can’t be achieved through budget reconciliation.

Price said the new plan gives states “the flexibility to define what healthcare is.”

“We need a system of the highest quality that empowers patients through transparency and accountability. We think it’s important for the American people to be able to select the physician they see and the place they’re treated, and government ought not to be involved.”

When asked if it should be called TrumpCare, Price said he liked “PatientCare” better.

When Spicer was asked if this is Donald Trump’s bill, Spicer answered, “This is a bill that we have worked on with Congress. We feel very good about where it is. It’s not his bill or their bill.”

Spicer again referenced the statement issued by the White House Sunday on the president’s claim that his predecessor wiretapped him before he won the election. He added that Trump has not spoken with James Comey, but has no reason to believe he doesn’t support him.

Has Spicer seen evidence that Obama wiretapped Trump? “As far as me, no,” Spicer said. “I am not in a position where that would be in my regular daily duties.”

Trump will not correct his incorrect tweet about the number of Guantánamo Bay detainees released under Obama that have engaged in militant activity after their release. He wrongly said it was 122, though many of those were actually released under George W. Bush.