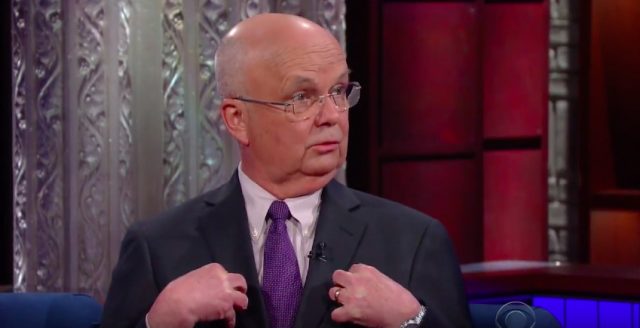 “On Saturday morning, at 6:35 in the morning, the president tweeted that Barack Obama wiretapped him in Trump Tower,” Colbert asked Hayden, “Is that possible?”

“How is that not possible? The United States government has the power to wiretap, and there are all these Russian rumors with the Trump campaign. Why wouldn’t the president do this?”

Hayden said only a federal judge has the authority to grant a wiretap.

On Saturday, Trump tweeted that he had “just found out” Obama wiretapped him before he won the election.

Terrible! Just found out that Obama had my "wires tapped" in Trump Tower just before the victory. Nothing found. This is McCarthyism!

Is it legal for a sitting President to be "wire tapping" a race for president prior to an election? Turned down by court earlier. A NEW LOW!