A California city will quietly consider whether to declare itself a sanctuary for illegal immigrants Monday, when the city council votes on a resolution put forward by anti-Donald Trump organizers.

The resolution would bar local authorities in San Carlos from cooperating with federal agents to enforce immigration laws, officially designating the city as a safe zone from deportation for illegal immigrants who commit crimes. Such cities are widely known as “sanctuary cities,” although the proposal, interestingly, makes no mention of the politically loaded term.

The city council will vote on the resolution to declare San Carlos a “Welcoming City” at a meeting Monday night, after residents who show up have a chance to voice their opinion. The meeting will be live-streamed.

One city resident, who asked not to be named to avoid a backlash from the organizers, told The Daily Caller News Foundation he thinks the label is a “disguise” intended to obscure the reality of the policy change. Vice mayor and city council member Matt Grocott echoed that suggestion, saying the goal of the term is probably to avoid penalties from the Trump administration.

Trump has threatened to cut federal funding to sanctuary cities. The threat was enough to prevent a neighboring California city, San Mateo, from declaring itself a sanctuary for illegal immigrants in a recent vote on a similar resolution.

Grocott told TheDCNF: “It’s just semantics to describe us or the county as a ‘Welcoming City,’ simply because they want to avoid putting a target on our backs relative to the federal government.”

The organizers behind the resolution are a group of at least 100 residents who call themselves “#Resist: San Carlos,” and some regularly meet to discuss ways to “resist” the Trump administration. Messages on the group’s online platform Meetup reveal their hand in submitting the resolution to the city council and their plan to swamp the meeting Monday in a show of support.

“WE NEED TO PACK THE HOUSE!” a message informing members of the vote on the resolution reads. “San Carlos council members have told me that the biggest influence on their decision-making is local citizens speaking at their meetings. You don’t even have to prepare a big speech – just stand up and say ‘I support the passage of the Welcoming City Resolution.’ That’s it. 2 min or less and you can change the world.”

Interestingly the group does label the action a “sanctuary city vote.” 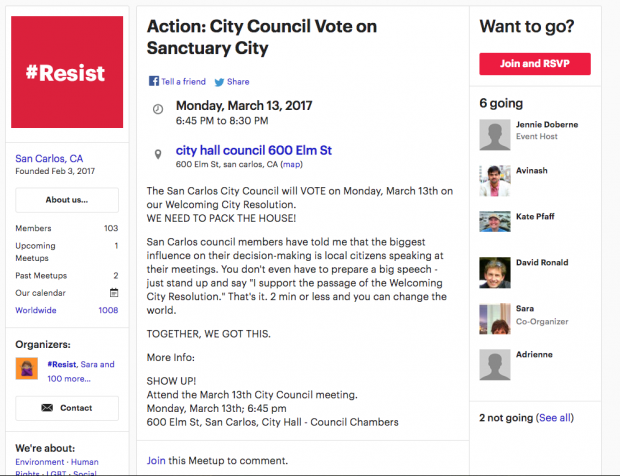 “I think what the city is doing is deplorable,” the San Carlos resident told TheDCNF. “They are supposed to be non-partisan and yet they are doing the bidding of the Resist Trump folks. As a city, San Carlos should uphold all the laws of our country, state and nation. They were not elected to pick and choose what laws to uphold. They need to uphold them all or work to change them.”

Another resident adds in an email to Grocott provided to TheDCNF: “After hearing from the Chief of Police [in San Mateo] and some of the pitfalls including funding issues that could be cut at the federal level it was more than prudent to not declare [San Mateo] a sanctuary status. This is a mistake to do so and will have detrimental ramifications to our fine city.”

Organizers presented the resolution to the city council in a February meeting, successfully winning the required approval from 3 of the 5 members to get it included on the agenda for a vote.

Another resident expressed his support of the proposal in an email to Grocott: “American values, and San Carlos values, demand that we open our arms to our neighbors – making them feel welcome not afraid.”

Both San Mateo and San Carlos are a part of San Mateo County, which declared itself a sanctuary county in 2014. Additionally, San Carlos no longer has a local police force, but contracts the job out to the San Mateo county Sheriff’s department. One of the organizers told TheDCNF the group sees “pressuring” the San Mateo sheriff to go along with the policy change as important, should San Carlos adopt the resolution.