The action was criticized by opponents of the administration, but Sessions was once on the other side of the chopping block when Bill Clinton became president and Sessions was a U.S. attorney in Alabama.

Ultimately, it is not unusual for a new president to dismiss the appointments of the previous administration’s U.S. attorneys. What is interesting, however, is to see where some of the players in the appointment and dismissal process have ended up between administrations.

In March 1993, Clinton Attorney General Janet Reno ordered the resignation of all 93 U.S. attorneys, all of whom were Reagan and Bush appointments. A Justice Department official told CNBC that Sessions still has the letter that Reno sent to him at the time. 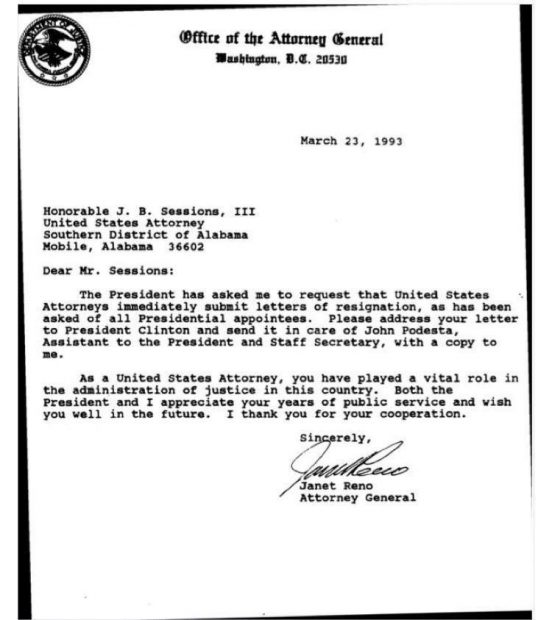 Letter from AG Reno to US Atty Sessions 1993

Reno said she asked for the resignations, according to The Sun Sentinel, “so that the U.S. attorneys presently in position will know where they stand and so that we can begin to build a team that represents a Department of Justice that represents my views and the views of President Clinton.”

Although President Donald Trump previously told now former U.S. Attorney to the Southern District Court of New York Preet Bharara he wanted him to stay on the job, Trump changed his mind and fired Bharara on Saturday after the U.S. attorney refused to resign at first.

Bharara’s history goes back to the George W. Bush administration when he served as Chief Counsel to New York Democratic Sen. Chuck Schumer. Bharara led investigations of the dismissals of U.S. attorneys fired by Bush at the time.

A statement from Schumer’s office to The New York Times said he was “troubled” to learn of the requests for resignations, “particularly that of Preet Bharara.”