In recent months, America’s various hardcore white supremacist organizations have engaged in considerable outreach efforts on college and university campuses to convince students to join their fringe cause.

Since around the beginning of the current academic year, white supremacy groups have attempted to proselytize on U.S. college campuses a total of 107 times — and 65 times since January, according to a report by the Anti-Defamation League.

Racist agitprop has appeared on campuses in over two dozen states — in hallways, in parking garages, on utility poles and on street signs.

One white supremacist group responsible for littering college campuses with racist posters and fliers is American Vanguard. The group’s website features propaganda about “an America based on the immutable truths of blood and soil.” Members “must be physically fit.” Also, “no non-white-Europeans.” “No hand/neck tattoos,” either, but “exceptions” are “possible.” 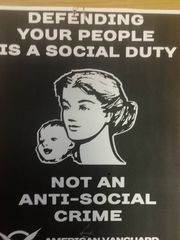 “Defending your people is a social duty not an anti-social crime,” read one of the posters.

“We have a right to exist,” read another.

The posters have an uncanny resemblance to Soviet-era propaganda.

“This is a transparent effort to bait people into overreacting, thereby giving a minuscule fringe group attention it does not deserve, and that we decline to do,” Purdue president Mitch Daniels said in a statement about the posters, according to The Lafayette Journal & Courier.

American Vanguard also deposited at least one version of the same poster at the University of Central Florida in November. 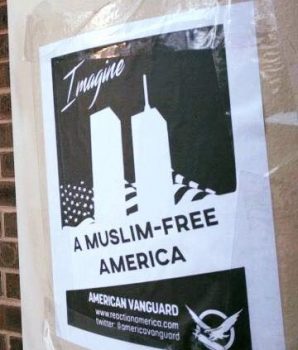 In February, American Vanguard paid visits to Rutgers University and the University of Texas to tape up fliers demanding a “Muslim-Free America.”

The black and white fliers featured a stark image of the World Trade Center with an American flag billowing in the background. “Imagine a Muslim-free America,” they read.

The flier at Rutgers appeared on the wall of a building where Muslims students pray, according to the New Jersey chapter of the Council on American-Islamic Relations.

A second group spreading racist posters on U.S. campuses is American Renaissance, a group dedicated to “race realism” which promotes “racial consciousness” and believes that there is a “war on white heritage.”

In January 2017, American Renaissance founder Jared Taylor suggested that the election of Donald Trump offers an extraordinary opportunity for white supremacists to enter the political mainstream.

“It is widely understood that the election of Donald Trump is a sign of rising white consciousness,” Taylor implored, according to the Anti-Defamation League. “Now is the time to press our advantage in every way possible.”

Taylor and his colleagues provided poster images and instructions for printing them. They also helpfully provided a “poster tactics” video explaining best practices for poster placement.

One of Taylor’s posters features a dark, solitary entering a maze with the message “Free yourself from white guilt.” 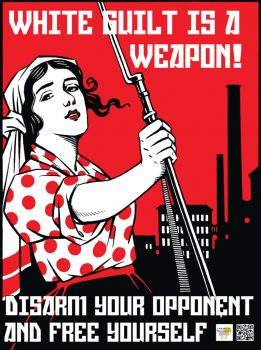 Like the American Vanguard posters, a second American Renaissance posters is strongly reminiscent of Soviet propaganda. “Disarm your opponent and free yourself,” the red and black poster exhorts.

A third group plastering white supremacist posters on American college campuses is Identity Evropa, an organization with a fondness for neo-Hitler haircuts and capital letters. On its website, Identity Evropa describes itself as “a generation of awakened Europeans.” Also, despite the name, Identity Evropa only accepts “applicants from the USA.”

Identity Evropa’s ongoing “Project Siege” is a coordinated effort to cover campuses across the country with Greco-Roman-style racist posters. 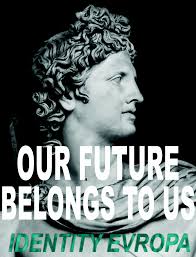 According to the Identity Evropa Twitter feed, the group has placed its posters, affixed stickers or chalked its logo and slogans on over 50 campuses in at least 20 states.

Identity Evropa has been most prolific in Ohio, Texas and California.

“Project Siege is the beginning of a long-term cultural war of attrition against the academia’s cultural Marxist narrative that is maintained and propagated into society though the indoctrination of the future managerial class. If we are to be successful in combating the current paradigm,” Identity Evropa founder Nathan Damigo, a 30-year-old student at California State University at Stanislaus, wrote in an online message about his “Project Siege” plans for the 2016-17 academic year, according to the Anti-Defamation League.

The weak shall inherit nothing. pic.twitter.com/haVWiTVOYh 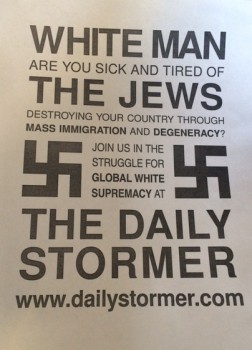 In addition to American Renaissance, American Vanguard and Identity Evropa, a white supremacist hacker named Andrew Auernheimer flooded thousands of campus printers around the country with virulently racist and anti-Semitic fliers in the fall.

Auernheimer, who calls himself “Weev,” sent the swastika-adorned flier to some 50,000 networked campus printers.

“I unequivocally support the killing of children,” Auernheimer wrote, according to the Anti-Defamation League.

“I believe that our enemies need such a level of atrocity inflicted upon them,” he also wrote, because “the hordes of our enemies from the blacks to the Jews to the federal agents are deserving of fates of violence so extreme that there is no limit to the acts by which can be done upon them in defense of the white race.”

Auernheimer also beseeches white people to attack Jewish people, black people and other minorities “until far after their daughters are raped in front of them,” until the “eyes of their sons are gouged out before them” and “until the cries of their infants are silenced by boots stomping their brains out onto the pavement.”

In-story photos are from a report by the Anti-Defamation League.