As the northeastern U.S. gets pummeled by Winter Storm Stella, it’s worth remembering The New York Times published an op-ed predicting the “end of snow” more than three years ago.

Peter Fox, the editor of Powder magazine, suggested “The End Of Snow?” in a February 2014 op-ed. Fox lamented the cancelation of two events at the winter Olympics in Sochi, Russia that year, and noted predictions that some cities would be too warm to even hold the winter games.

“[W]ith a rise in the average global temperature of more than 7 degrees Fahrenheit possible by 2100, there might not be that many snowy regions left in which to hold the Games,” Fox wrote for The NYT.

“Europe has lost half of its Alpine glacial ice since the 1850s, and if climate change is not reined in, two-­thirds of European ski resorts will be likely to close by 2100,” Fox wrote. “The same could happen in the United States, where in the Northeast, more than half of the 103 ski resorts may no longer be viable in 30 years because of warmer winters.”

Scientists have measured a general decrease in Northern Hemisphere monthly snow extent since 1966, but that takes into account all 12 months of the year. Though even then, snow extent has increased since the late 1980s.

But Northern Hemisphere winter snow extent has increased in that time. Rutgers University’s Global Snow Lab lays it out here: 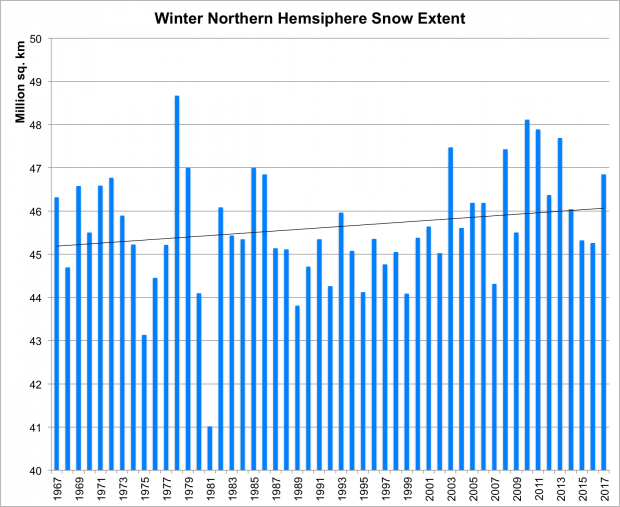 What’s interesting is Fox wrote his article not long after Winter Storm Jonas left 30 people dead and millions more covered in up to two feet of snow in January. That winter season was one of the coldest on record, according to a meteorologist with AccuWeather.

Many parts of the Midwest and East saw way more snow than usual. Philadelphia, for example, saw 314 percent of its average yearly snowfall that winter.

The northeastern U.S. is now in the midst of Winter Storm Stella, which is ironically being blamed on global warming.

Even more ironic is The NYT published an article just last week claiming spring came early this year, blaming that too on global warming.